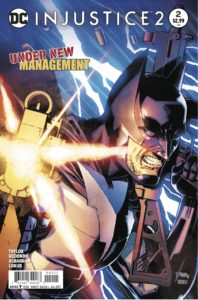 Issue #2 of the Injustice 2 collects Chapters 3 and 4 of the digital series. Amanda Waller and Rick Flag have been killed by someone claiming to be Batman, who now seeks to control the Suicide Squad. Meanwhile, Doctor Fate has convinced Black Canary and Green Arrow to join (the real) Batman in his attempt to reinstate order in the world.

The issue picks up right where the last issue ended, with the mysterious fake Batman standing over the bodies of Amanda Waller and Rick Flag. He then continues to pick off the members of the Suicide Squad who he doesn’t deem “useful” by detonating the explosives in their brains. It’s a pretty brutal intro, and it further proves that this fake Batman isn’t someone to take lightly. After he regathers the Suicide Squad, now under his command, they break out of the Pentagon to take on a new mission.

Before they escape, the fake Batman is confronted by the real Batman. It’s soon very clear that Bruce doesn’t stand a chance as he takes blow after blow from his doppelganger, ultimately leaving him lying on the ground and severely injured. Fans have speculated about the identity of this imposter, and this issue doesn’t offer any solid answers - but it does give plenty of clues.

Bruce wakes up in the hospital where Batgirl has been tending to him. As he explains the fight to her, he tells her that the fake Batman wasn’t a meta-human (which seemingly rules out the popular opinion that he is actually the Reverse Flash). After reviewing a message Lex Luthor recorded before he died, Batman is stirred to action again and knows he needs to recruit help to rebuild world order. In a timely manner, Black Canary and Green Arrow arrive for a humorous and heartfelt reunion. Without spoiling too much, I’ll just say that this scene is a lot of fun, mainly because each character is written so well.

With Dinah and Ollie back in this dimension, Batman begins planning their course of action together. But their reunion is cut short, as they are alerted that Superman’s prison has lost power, and is about to be attacked by an unknown threat.

There are plenty of strengths in this issue, but they feel somewhat diffused due to a sharp change in tone. When Chapter 3 and 4 were released digitally, the change in tone between the stories wasn’t felt as much because they were read as separate books. To read them as one issue make the reader take a big jump in tone that can be hard to track with. I would highly recommend reading these digitally, or taking a break halfway through this issue to get the full effect of the story.

Just like issue #1, Bruce Redondo continues to do an amazing job with the art on this book. For a title that releases once a week, he offers a surprising amount of detail, especially in facial expression, that really brings this book to life.

This issue is packed with intense action, emotional surprises, and fantastic artwork that all feel weaker than they should due to a jarring change in tone halfway through the issue.