Injustice: Gods Among Us REVIEW

Injustice: Gods Among Us
NetherRealm Studios

In Batman v. Superman: Dawn of Justice, Batman was terrified by the idea that Superman could turn against humanity. The realization of Superman’s humanity, specifically that the two had mothers who shared the same name, shook Batman to his core. This is not the first story to tackle the threat of a rogue Superman. The Tower of Babel story arc in the Justice League comics, which was later portrayed in the animated film Justice League: Doom, also addressed Batman’s fears of superheroes going rogue. In it, Batman’s contingency plans are stolen and used against his fellow Justice League members. In Injustice: Gods Among Us, however, the Justice League does go rogue and there is little Batman or anyone can do to stop them. An interesting idea, but is the story worth experiencing? Is there a solid game underneath this clash of comic book titans?

Injustice: Gods Among Us was developed by NetherRealm Studios, the team behind the Mortal Kombat franchise. Despite this pedigree, the game doesn’t have gruesome Fatalities or provocative attire. There are, however, a number of similarities between Injustice and NetherRealm Studios’ previous game. Like Mortal Kombat, Injustice has a strong single player component due to the game’s focus on story. Regardless of whether or not the story, written in part by actual comic book writers, impresses players, DC Comics went the extra mile by publishing a short series of comics leading up to the events portrayed in the game. The additional material helps draw in comic book readers, as well as better explain how the Justice League went from superheroes to villains. From a marketing standpoint, the use of a different medium is a stroke of genius, helping to broaden the game’s target audience beyond just fighting game fans. 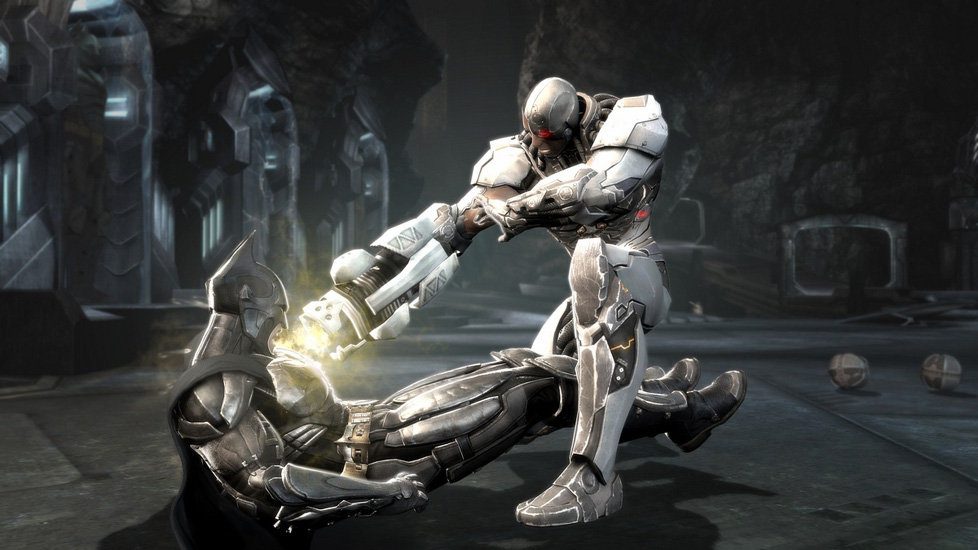 The events of Injustice are set in an alternate universe which differs somewhat from the mainstream DC comic universe. For example, in this alternate universe, Lex Luthor and Superman have never been adversaries. The setting helps provide justification for the game’s events. Under the control of Joker, Superman not only wipes out most of Metropolis, but he also kills Lois Lane and their unborn child. This moment of powerlessness becomes the basis for the reign of tyranny which follows. Superman brutally kills Joker, then, with the assistance of most of the Justice League, installs a world government, ruling through force. Batman’s resistance has been nearly defeated and he’s running out of options. In a desperate attempt to turn the tide, Batman pulls the Justice League from the mainstream DC comic universe over to this alternate universe to fight by his side. Alternate universes have been a DC comic book staple for decades. One of the most notable examples is ‘Crisis on Earth-Three’, which was later the subject of the animated film Justice League: Crisis on Two Earths, in which the Justice League faces off against the Crime Syndicate, a group of evil superpowered doppelgangers.  The plot is surprisingly good for a video game, providing players with a better understanding of the comic book characters. For example, when Superman from the mainstream universe argues with the High Councillor Superman over the ruthless actions he has taken since Lois’s death; it provides a unique look at the character and the struggles he faces as a result of his incredible power. Comic book fans that are looking for a good story will not be disappointed.

Graphics are solid on all platforms, even on the Playstation Vita. Characters and backgrounds are well-rendered and true to the source material, however, character costumes have been given an added flair by NetherRealm Studios. Having spent considerable time with both the Playstation 3 and Playstation 4 versions, I see little difference between the two. There are, however, bizarre slowdowns during cinematic sequences on the Playstation 4 version. NetherRealm Studios could have done a better job optimizing these sequences when porting the game over from the last generation consoles. In terms of audio, the background music is up to par and the voice acting exceeds expectations. NetherRealm Studios brought in a number of celebrities to voice Injustice’s cast, including Troy Baker, Adam Baldwin, Kevin Conroy, George Newbern and Tara Strong, who have voiced these characters previously. This extra effort will be appreciated by fans of the DC animated television shows and recent video games like the Arkham series. 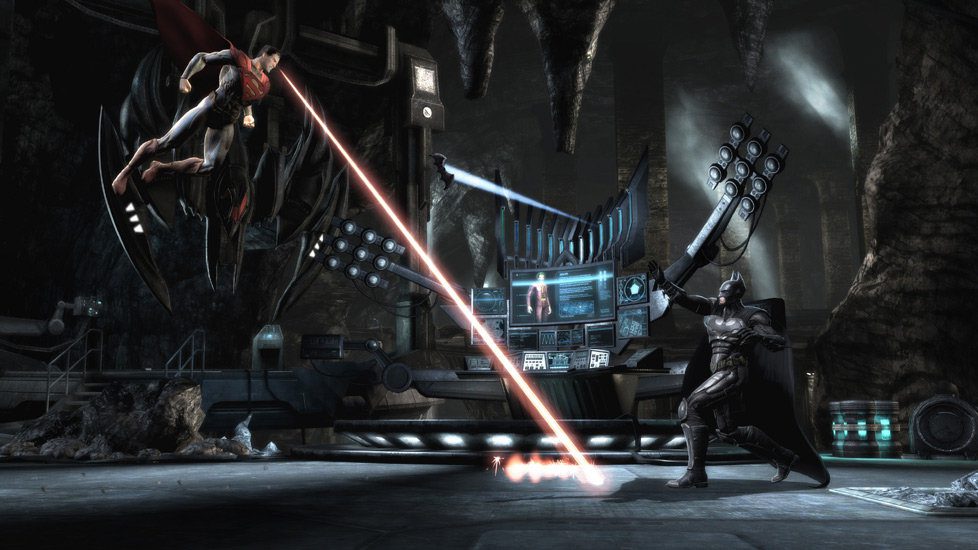 Gameplay in Injustice is a step above NetherRealm Studios’ previous game, Mortal Kombat, but still, feels somewhat dated. It is a far cry from Mortal Kombat vs. DC Universe, but falls short in comparison to other two-dimensional fighter games like Ultra Street Fighter IV and King of Fighters XIII. Each character has a handful of set combo strings made up of light, medium and hard attacks, along with special moves, and a super gauge which can be used to enhance special moves, disrupt an opponent’s attack or execute a super move. This system will be familiar to anyone who has played a modern two-dimensional fighting game. The difference is that it is much harder to end combo strings with a special or super move in this game than it is in others. Recovery time on certain normal attacks cannot be canceled, and that extra second delay means Batman won’t throw his Batarang. Because of this rigidity with the combo system, players will need to spend more time practicing to figure out which attacks allow for a super or special follow up. Injustice also adds character traits, abilities unique to a specific character like a special attack or buff, as well as the ability to wager their stored super energy for a chance at additional health while on their second life bar. While character traits are a nice addition to a familiar system, the wager ability is more of a gimmick. Losing players who aren’t certain to win a wager won’t activate the attack, and players with the advantage would rather use their gauge more effectively. Aside from an array of attacks and abilities, stages are interactive, giving calculating players an edge in combat. Though not game changing, this interactivity is a welcome addition.

As stated previously, like Mortal Kombat, Injustice has a strong single player component due to its story focus. This is where the game really shines. The Story mode itself will take players roughly 6 hours to finish, maybe longer depending on their skill at fighting games. Battle mode is the game’s arcade mode, allowing players to take a character of their choosing and play through one of many different arcade ladders. Completion of a ladder unlocks a character specific ending which can be viewed again at any time in the game’s Archive. There is also the S.T.A.R. Labs mode which is much like Mortal Kombat’s Challenge Tower, filled with character specific challenges which vary from fun to frustrating. There are additional characters available as downloadable content (included in the Ultimate Edition), along with corresponding S.T.A.R. Labs missions. There is more than enough single player content to make it worth the purchase, despite the poor quality of the game’s multiplayer. Couch multiplayer is solid, but online play is, to be blunt, weak. NetherRealm Studios’ net-code appears to have been improved since Mortal Kombat, but online play is inferior to other fighting games. Mortal Kombat X, NetherRealm Studios’ latest game, fairs no better, despite promises to improve online play. Matches are hampered by lag, even when both players are in the same geographical region and have strong connections. If you really want to play a fighting game online, Ultra Street Fighter IV and Dead or Alive 5: Last Round are much better. One can only hope NetherRealm Studios figure out how to improve their online play by the time Injustice 2 is released. 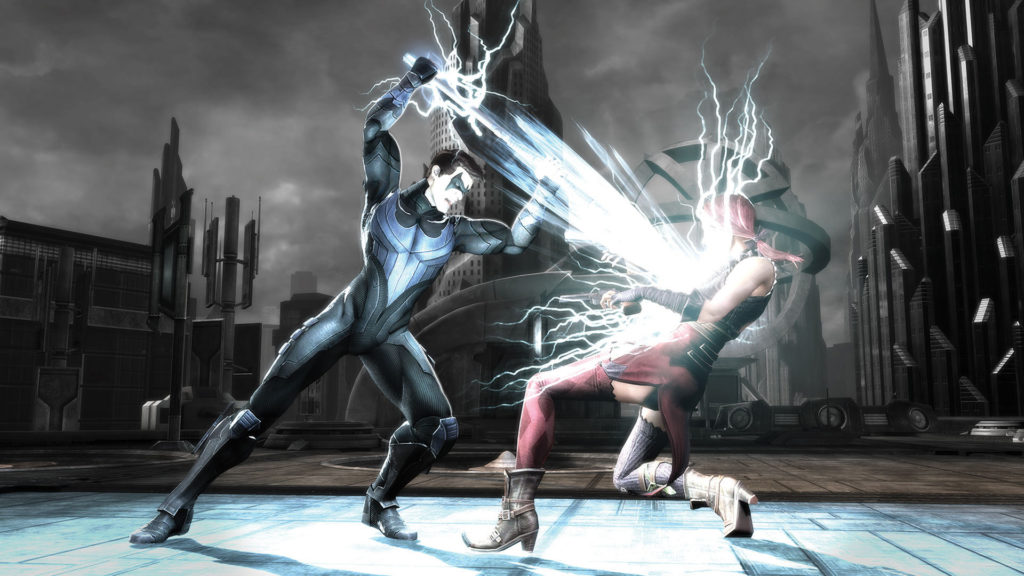 As a long-time fan of DC comics and fighting games, I thoroughly enjoyed Injustice: Gods Among Us. There is a reason why it received “Best Fighting Game” awards from IGN, GameTrailers, Game Informer and the VGX in 2013. Injustice offers more mature gamers a solid fighting game, despite its rigid combo system, with a great story written by professional comic writers. It’s a shame that all of this is hampered by a poor online multiplayer. Parents concerned about the dark nature of the game’s story, as well as the graphic displays of violence, may want to do a bit of research before deciding whether to pick up or pass on this game. Injustice is nowhere near as violent as Mortal Kombat, but I personally wouldn’t recommend it for younger gamers.

Highlights: A solid fighting game with a large roster of DC superheroes and villains, with a good story written by professional comic writers.

Weak Points: Though a step above Mortal Kombat vs. DC Universe, the rigid fighting system feels a bit dated compared to other two-dimensional fighters. Online play has improved since Mortal Kombat, but it is still far inferior to other fighting games. 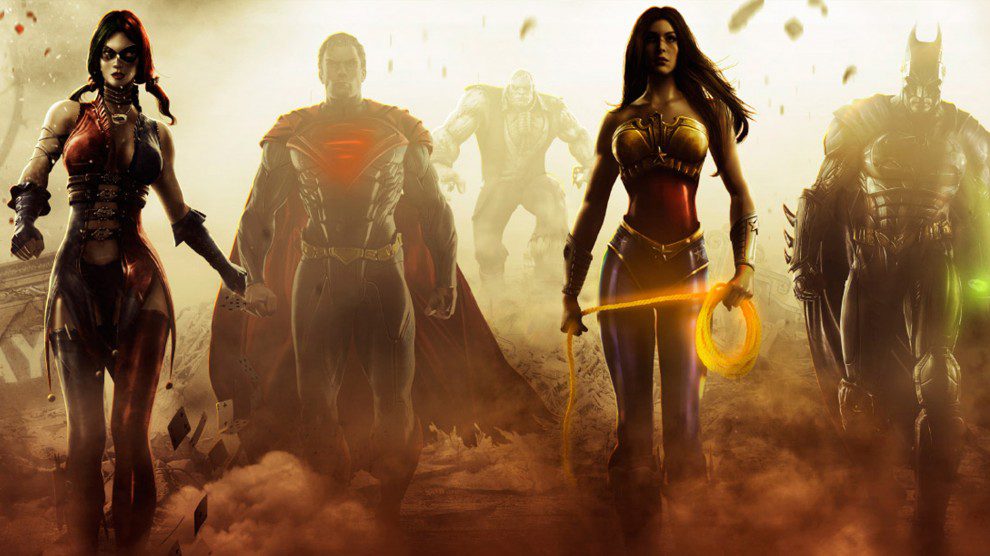