Normally, I’d feel bad for any movie opening on the same weekend as a behemoth such as a sequel to ‘Fantastic Beasts‘, but for my money ‘Instant Family‘ may be a film that is an entity unto itself. It’s got a great story, exceptional cast, heart, humor and a great deal of fun. Mark Wahlberg and Rose Byrne star as Pete & Ellie, a couple who have a successful home flipping business and, at the peak of their career, decide that maybe they have something missing in their lives. Upon deciding to go through the adoption process, they are impressed by a 15-year-old orphan named Lizzy (played by Isabela Moner). The catch is that she comes with a little brother and sister as well. So now, with a sudden influx of 3 children at once, their once normal routine gets turned completely upside down. Hilarity and heart-warming moments ensue from there in rapid succession.

The director and co-writer of this film, Sean Anders, is mostly known for his screwball comedies like the ‘Daddy’s Home‘ films and ‘Horrible Bosses 2‘. He outdoes himself on this movie with perfectly intermingling humor and heart in a substantial manner. The story is based partly on his own experience with adoption and the results are a truly wonderful film that finds its footing quickly and maintains a perfectly seamless balance between laughs and love. Had it been a PG rating instead of a PG-13 (and it’s a pretty hard PG-13), I’d say it’s great for the whole family, but the language and a few of the situations may not be suitable for small children. Use your best judgment when deciding. With that being the only minor issue I had with the movie, I’d say that ‘Instant Family’ adopts a solid 9 out of 10. If you don’t want to fight the crowds for the opening weekend of ‘The Crimes of Grindelwald‘, then ‘Instant Family’ is an excellent alternative that you will most definitely enjoy!! 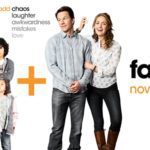