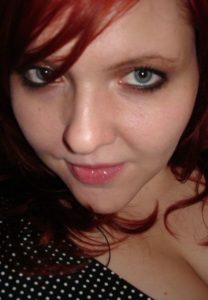 Kelly Thompson is a writer of novels and comic books.  She is best known for the Jem and the Holograms comic she created with artist Sophie Campbell, a modern reimagining of the 1980s cartoon of the same name.  Her other works include A-Force, Heart in a Box, The Girl Who Would Be King, and Storykiller, among others.  We got a chance to talk with her and get her thoughts on Jem’s past and future in comics.

Geeks WorldWide: What have you enjoyed most about writing Jem and the Holograms (mainly referring to the 26 regular issues)?

Kelly Thompson: I fell SO in love with the characters. Beyond what I ever could have imagined really. They truly felt like my babies and I never expected the connection to be that strong. But they’re such fascinating, enigmatic, and complicated women, and I loved getting to walk in their shoes, getting to see the world through their eyes.

GWW: Is there anything you would go back and change if you had the chance?

KT: Because of where the ongoing series was decided to end (at issue 26), I had to move some things around in the last two arcs, so that I could reasonably get us where we needed to be by “the end” and as a result a few things got short shrift - Shana and Regine in Italy didn’t get fully explored as I would have liked, and the character I introduced The Fox did not get the full arc I was hoping for. In a perfect world, Sophie and I also would have changed some of Blaze’s dialogue in Jem and The Holograms #12, but we were at least able to make those corrections for the Dark Jem trade, which is a pretty good compromise.

GWW: Do you enjoy writing for the Hologram, Misfits, or Stingers characters best?  Or is there a fun challenge to each?

KT: Ack! Picking between babies is never fun! I think I get something different from each of them. I really enjoy the deep love and literal sisterhood of the Holograms, their innate goodness and optimism is admirable and beautiful. But I also love the moxie and family “forged through fire” that are The Misfits…they are literal Misfits, most of them with significant trauma in their pasts, that built their own family and that’s beautiful too. The Stingers I didn’t get a chance to know as well and the dynamic was deliberately never quite gelling because we established Raya as the “piece that didn’t fit” but I do love the almost fanatical devotion Riot, Raya, and Minx have for one another. And Raya and Minx as sort of gorgeous conniving thugs is endless fun to write.

GWW: What brought on the decision to do a crossover arc? 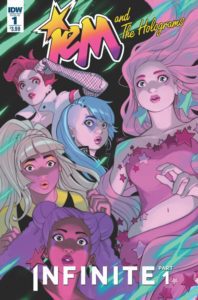 KT: Well, we knew the series had run its course in some ways - it’s hard to keep any comic going for two years unless you’ve got a big movie or TV franchise behind you or you’re called Batman or Wolverine or Star Wars! But we also knew we weren’t ready to end the book and that we had so many other ideas and adventures we wanted to explore. I’d specifically wanted to go a bit more sci-fi for a while, to turn things on their ear a bit, and so we thought a big epic summer event crossover might be the best way to explore that.

GWW: What kind of things can your readers look forward to seeing in future issues?

KT: I think you can expect to find all the same characters and dynamics you’ve come to know and love but with a more sci-fi adventure bent to it. We’re taking the characters and ideas in new directions that the cartoon never got the opportunity to explore but which I think it probably would have had it kept going for more seasons - it was a groundbreaking and fascinating cartoon and we try our best to honor that in our own ways.

IDW Publishing Interview Jem jem and the holograms Kelly Thompson
Add your voice!Join the conversation on Discord...
Join Our Discord