We have all heard of the famous movie Gremlins from 1984 directed by Joe Dante. Now toss those great lines and images to the back of your brain and experience a whole new Gremlin. Ryan Bellgardt is taking us to a whole new world and an entirely different creature. 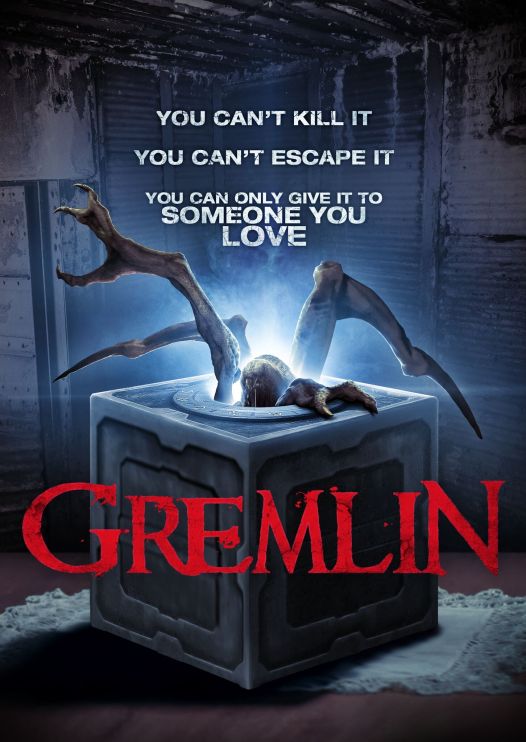 Gremlin is described as Godzilla meets The Ring in a thrilling, uniquely-scripted horror jaunt that boasts amazing computer-generated effects and from some of the best in the game.

Gremlin is about Adam (Adam Hampton) who receives a mysterious box from a relative containing a creature that will kill everyone he cares about. The only way to be rid of the curse is to give the box to someone he loves. As the ominous timer on the box counts down to its end, he can only imagine the horrors that await. Does he give the box away to save his family, or unleash a monster upon humanity? He can’t destroy it. He can’t escape it. He can only give it to someone he loves… 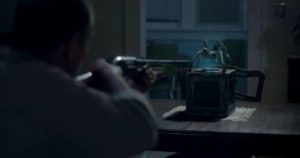 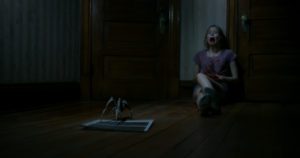 I recently had a chance to ask Ryan a few questions about his newest film, and his evil star the Gremlin.

GWW:  What’s a Gremlin and is he the spawn of a furry Mogwai?

Ryan: Our Gremlin is a creature that is somehow trapped inside of a mystical box for eternity.  Its sole purpose is to kill the loved ones of whoever possesses the box. It was never furry that I know of. Haha!

GWW:  Was it easy to get away with that title considering the other movie?

Ryan:  We wanted a title that would draw attention to the movie and still describe what it was about. I looked up Gremlin on IMDB and was actually pretty shocked to find that no one had a made a movie called Gremlin before. Gremlin lore goes way back before 1984. I remember there being a gremlin in a Looney Tunes cartoon with Bugs Bunny and on the wing of an airplane in the Twilight Zone. Gremlins were first blamed for aircraft malfunctions in the World Wars. The 1984 movie, made gremlins popular but didn’t invent them.

GWW:  Did your career in SFX make Gremlin a cakewalk?

Ryan:   I had been tinkering with visual effects and cgi as a hobby for about 10 years before attempting to implement a CGI creature into a movie. I wouldn’t say it was a cakewalk, but I felt confident that our team could pull it off. There is about 150 shots of the Gremlin in the movie. Stephanie Roach did all the animation and I rendered and composited the creature into the live action plates. It took a little over 6 months to complete all of the visual effects in the movie.

GWW: How did your actors go performing against ‘nothing’? Tennis ball on a string or imagination come into play?

Ryan:  Our prop builder, Emilio Vitaly, built us a stand in creature that was to scale. We had it on set to show the actors what they would be dealing with when we later inserted the creature digitally. That helped them some, but mostly they were just acting to nothing. I’ve found actors to have pretty active imaginations and they had no trouble pretending it was really there.

GWW: How much of the film is an ode to the classic B-creature features of the golden days?

Ryan:  I love those movies and they certainly inspired certain aspects of Gremlin, but what I really like are 80’s popcorn movies. I grew up on Spielberg and Carpenter and even as I got older I gravitated towards fun popcorn movies. I think because of that our movies will always have an aspect of fun and escapism. But with Gremlin, I wanted to go darker and disturbing. I wanted to try to see what would happen if I put a group of broken characters in an un-winnable situation, then, of course, add a giant creepy alien magic god monster.

GWW: One final question? Are we nearing Gremlin 2: Back Outta the Box, yet?

Ryan:  Haha! You never know. You could say we left it open for a sequel, but right now we’re busy in post production on our third feature The Jurassic Games.

Hope you enjoyed the interview now sit back and enjoy the trailer for Ryan Bellgardt’s Gremlin.