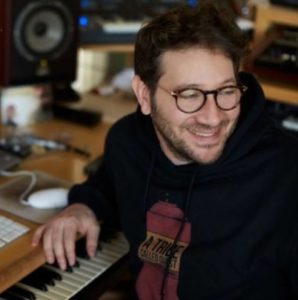 Jared Faber is a Grammy-winning and Emmy nominated Composer. His most recent project Teen Titans Go! To The Movies is currently in theatres. Jared took some time from his busy schedule to talk with the GWW and answer some questions about himself plus reveal his secret origin.

Dave Schultz (GWW): You made music your life’s mission at a young age. Who were your inspirations growing up? Any particular artists?

Jared Faber: Seeing the Chuck Berry documentary Hail! Hail! Rock ‘n’ Roll was a key moment for me. That film featured Chuck of course but also Keith Richards, Clapton and Etta James. It introduced me to Chuck Berry’s long-time piano player Johnnie Johnson and featured the great Steve Jordan (drummer/producer). I walked out of that film knowing exactly what I wanted to do for the rest of my life!

GWW: Are you a comic book fan and maybe more importantly, who is your favorite Teen
Titan?

JF: I read Archie Comics as a kid. I guess I’m more of a comedy fan. When it comes to Titans, how can you pick just one?

GWW: The score on Teen Titans Go! to the Movies is bursting at the seams with a variety of styles. Can you talk about how you approached the film and did you get the opportunity to explore any new territory you had been interested in writing?

JF: Yeah, I definitely got to explore genres that I’d never tackled before. I’d done quite a bit of comedic scoring in the past as well as sort of heartfelt emotional stuff. Titans gave me the chance to go full superhero with epic battle music! Originally my intention was to keep the score as synthetic and beat-oriented as possible. Once we really jumped in, it became clear there were a lot of different sounds needed and that orchestra would have to be a big part of it. I think ultimately, it’s a pretty cohesive sound that is a mixture of all of those things, synthesizers, programmed beats and orchestra and of course a little guitar for good measure!

Have you seen this:
Kaldur'ahm, From Aqualad to Aquaman - Young Justice Season 4 Phantoms

GWW: Jared, you’ve got quite the resume. From film, television, animation, video games to even operating your own music label. What aspect of your career poses the biggest challenge?

JF: Anything that starts with a blank page is always challenging! Meaning starting something creative from scratch. I really enjoy all of it and that’s why I always make an effort to continuously switch gears from songwriting and production to scoring, from working with artists to working on TV shows and films. There’s so many other mediums I’d love to dip into as well. Ultimately, I’m always happy when I’m working on music that I like and when I’m collaborating with smart and talented people!

GWW: Have you ever collected anything? Does Nostalgia ever rear its ugly head in the
Faber household?

JF: My studio is a constantly growing collection or instruments and gear! I obsess about different items at different times. I’m always searching for some major that is going to completely transform what I can do sonically or at least inspire some music. Guitars always high on that list (preferably vintage) but sometimes it’s microphones, other studio gear, vintage drums, synths…I definitely have a problem!

Have you seen this:
(SPOILER WARNING) DC League Of Super-Pets Plot Information

GWW: I’ve got to ask you about the nickname “J-Radical”. What’s the secret origin behind
that moniker?

JF: A friend first called me that in college but in the early 00’s I was working and hanging with a bunch of producers and all of us used different monikers to put music out under. It’s fairly silly and I think I may have outgrown it. That said, I am actually credited that way on so many things, it’s pretty funny. Most recently I did a kind of Beastie Boys style song for The Boss Baby Netflix show. I did it with my 2 partners Kool Kojak and Tiz Himself…I couldn’t very well credit myself as Jared Faber on that! That would just seem silly! Had to be Kool Kojak, Tiz Himself and (your boy) J-Radicál! I’m rapping on the song too which is also ridiculous! Film composers don’t rap!

To learn more about Jared Faber and hear his music visit jaredfaber.com.

For more info on the film Teen Titans Go! To The Movies you can find the official page here: www.warnerbros.com/teen-titans-go-movies