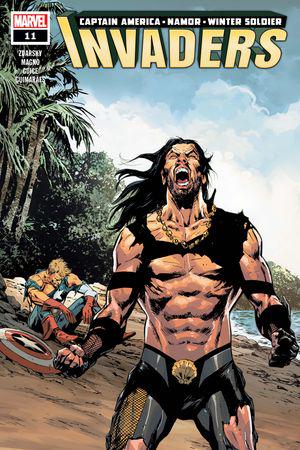 With both Steve and Namor trapped on a secluded island, the former Invaders will have to work together when they find a hidden military facility.

Cut off from their compatriots and with Namor human, both he and Steve work to make the best of a bad situation. Steve’s optimism gets under Namor’s skin and Captain America has to remind his old friend of how they fought and survived the war together. Especially, the promises they made as allies.

When the pair discover a secret base on the island, they find the scientists inside are working for the people they are there to stop. While Steve wants the element of surprise, Namor’s arrogance calls for a more direct approach. One that could get them both killed.

Chip Zdarsky does an impressive job of keeping one foot in the past and the present with this story. The history of and between these two characters makes this particular story arc more compelling and it is fun to see how Steve interacts with Namor and vice versa. The relationship is precarious, but Zdarsky manages to find those moments of friendship through the dialogue and the pace of the story.

Both Carlos Magno and Butch Guice do amazing work with the art. The contrast in the two styles works for conveying the tone of both the past and present in this story.