Welcome to the world of international intrigue and corporate espionage. The year is 2074 and corporations rule the world, keeping the fat cats fatter and the little guy weaker. The members of Invisible, Inc aren’t about to take this lying down and will stop at nothing in their attempt to bring these corporations down. You play the role of the Operator, an agent located away from the danger who is tasked with using the information gathered by the agency to issue commands to agents out in the field. Without you, the agency is blind.

The game is broken up into a series of Missions. Each mission has its own set of obstacles and objectives which increase in difficulty as the game progresses. Some missions may task you with rescuing prisoners or collecting money, equipment or technology upgrades.

Gameplay is typical of most Strategy RPGs; each of your characters takes a turn followed by each of the enemy units. Every action, including walking, uses up a character’s Action Points or AP. Once you’ve used up all of your characters’ AP, your turn ends and the enemies take their turns. After each round, the security level of the map increases, so the longer you take to complete your objective, the more challenging the mission becomes. However, don’t rush into things carelessly because the commands you issue cannot be undone without spending a Rewind. Using a Rewind allows you to turn back the clock to the beginning of your last turn, giving you a chance to rethink your actions and avoid a gruesome fate. Rewinds are a finite resource, so careful planning is still a necessity in order to prevent a mission failure. Unlike other S-RPGs, your characters do not have Hit Points, so every attack against you is a crippling one (or a fatal one, on higher difficulties). Unless another of your agents has a way to revive you (or uses the opportunity to save their own hide), it’s game over. 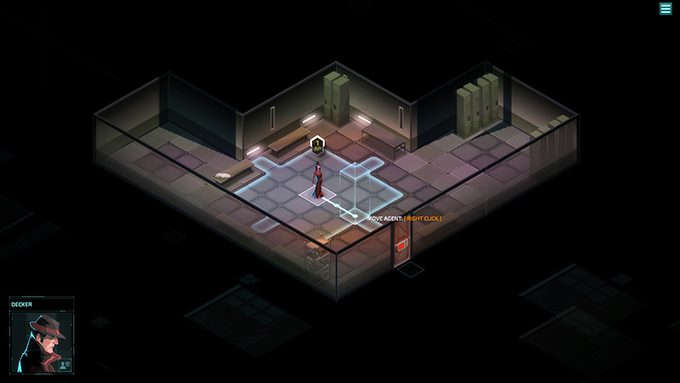 Move your cursor out from your agent to see how much AP will be used to move.

Fortunately, you’re not entirely defenseless during the enemy’s turn as you can cause distractions to divert their attention or even end your turn in Ambush Mode which allows you to automatically attack an enemy that gets within your attack radius. For tasers, that’s right next to you; for dart guns, that’s any space within line of sight. Successfully knock out an enemy and you’ll have a limited amount of rounds before they regain consciousness. This can be delayed by pinning an enemy down and/or dragging them with you, but this severely limits the distance your agent can travel in a turn.

Since a single hit can mean instant death, stealth is the name of the game. You’ll be using tactics to incapacitate guards, peek around corners or through doorways and hide behind cover to avoid detection. For anything beyond your physical means, you’ll be able to access an AI called Incognita to perform tasks such as hacking security cameras to expand your view of the map, cracking password-protected safes to gain access to money and loot or reprogramming security drones for that extra battlefield advantage. Performing these tasks uses a secondary resource known as PWR. PWR points will regenerate a little each round, but you can give them a boost by siphoning power from computer consoles scattered about the map.

When you begin a new game, you will start by completing a Trial Mission which will introduce you to the main gameplay mechanics. During this mission, you will be assisting Agent Decker, a captured spy who must sneak past his captors and escape his prison. Of course, you won’t do this alone, as you’ll have the head of the agency feeding you information and the helpful AI I mentioned above to help you overcome obstacles. Once Agent Decker successfully escapes, another agent, a woman named Internationale, meets him at the checkpoint to extract him. 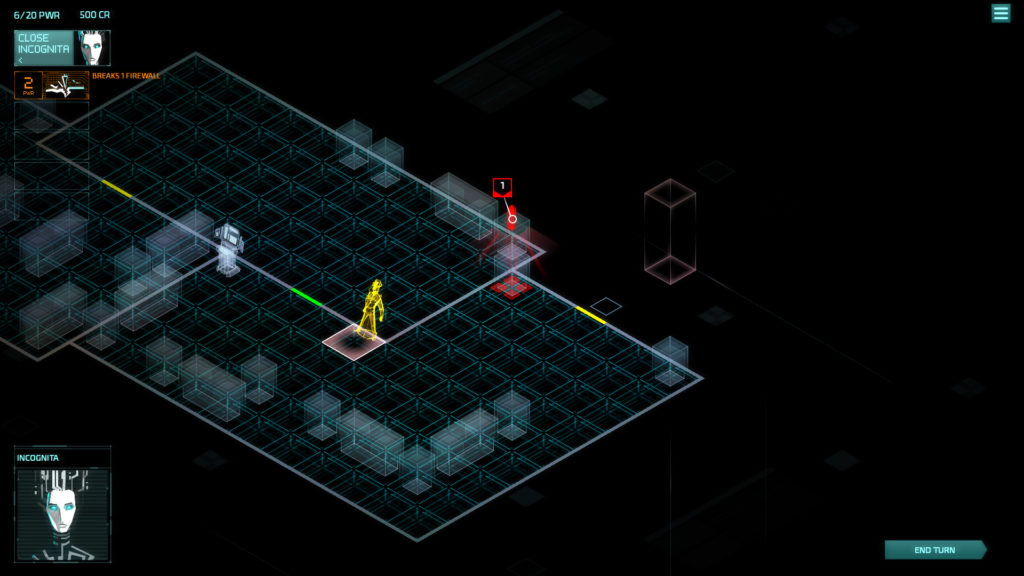 In Mainframe Mode, use Incognita’s PWR to break devices’ firewalls and take control of them.

After you complete this Trial Mission, you will be asked to choose your difficulty level for the campaign. There are three different difficulty levels in the game, as well as options that allow you to customize the game’s parameters to your liking. The harder the mode, the less Rewinds you will have, as well as disabling Mission Retries (continues) and having less overall time to complete the entire campaign. These adjustments allow for the game to be as forgiving or cruel as you prefer.

As the main story begins, the agency headquarters comes under attack. The head of the agency, Agent Gladstone, grabs Incognita’s motherboard and flees the scene as her agents give her a clear path to do so. Newly freed Agent Decker and his escort, Internationale, arrive on scene just in time to extract Gladstone. It now becomes your mission to attempt to track down and extract the other compromised agents and take revenge on your corporate attackers. However, with Incognita separated from her mainframe, you only have a limited amount of time to accomplish this before she shuts down for good, severing the agency’s connection to you and leaving them completely in the dark. The race against time begins.

At the start, you will have access to Agents Decker and Internationale, but as you complete missions and successfully extract captured agents, they will be added to your available roster. Each agent has certain skills which they are proficient in, so bringing the right agents on each mission helps to keep your side on the advantage. Between missions, you’ll have the ability to use the money you’ve acquired to level up your agents’ abilities or to buy and sell equipment. Missions are strewn across the entire world and it takes a certain amount of time to travel to each one. This is where the timer comes into play. Once you’ve run out of time, the endgame begins, so you better be ready before that happens. 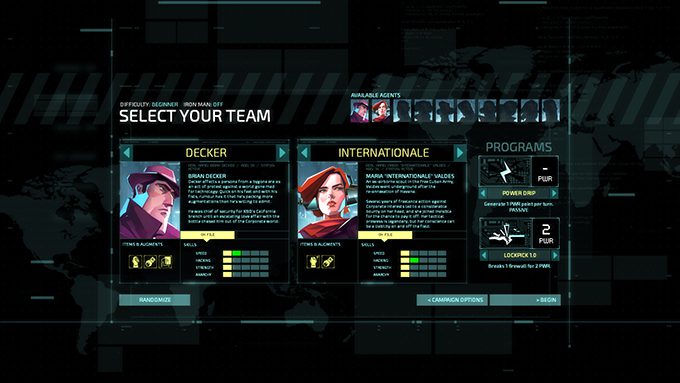 Agents Decker and Internationale will be your starting roster. Unlock other agents as you progress.

This time management mechanic forces you to prioritize what missions you take, as there will always be more to do than time allows. Will you go after some intel, more funds, better weapons, tech upgrades for the AI, or go after a captive in the hopes that it is one of your missing agents? Make the wrong choices throughout the campaign and the endgame mission may be the death of you.

Have you seen this:
Marvel's Avengers Launches with New Story Trailer

After playing the game for about seven hours, I had completed the endgame mission. Suddenly, the huge list of variables in mission variety and agent load-out made sense. The developers designed this game to be played multiple times. Each time you do so, you will gain experience based on how challenging the missions you completed during the campaign were. This XP unlocks more agents to use at the start of the next campaign and/or new tech upgrades to outfit your AI with. This is where the game either succeeds or fails. Are these rewards enough to keep you playing through the campaign over and over again? For some people, it might be. For others, it may not. I find myself leaning more towards the latter. However, since the game is so short, I might play through it once or twice more, but I don’t see myself unlocking every single bonus item as I fear the core gameplay may become too repetitive.

Invisible, Inc was made by Klei Entertainment, the same developers who created Mark of the Ninja and Don’t Starve. Not only are those both great games, but they are all three very different games as well. The folks at Klei are definitely proving their versatility with this library of games. The visuals for Invisible, Inc have a very stylized, polygonal look to them. It reminded me of the cutscenes from games like Flashback and Another World. The music is very atmospheric and instills a sense of danger and urgency without getting too repetitive. All of the characters and enemies are fully voiced and the performances are excellent. The entire package is extremely solid, but its reliance on repeat play could turn some people away.