Iron Fist episode 6 marks the first episode directed by the RZA, the GZA, Ol Dirty Bastard, Method Man, Raekwon, Ghostface Killah…wait it’s really only directed by the RZA but that was fun to say. Back to the continuing adventures of the Iron Fist. Rand Industries finds itself in a crisis after Danny is caught saying something he shouldn’t have. His actions could end up costing the company millions of dollars. Ward is really having a hard time coming to terms with the fact that Danny has power in the company. His usual stone faced demeanor starts to show more cracks than ever. He gets closer to his breaking point with every situation that pops up at the company. 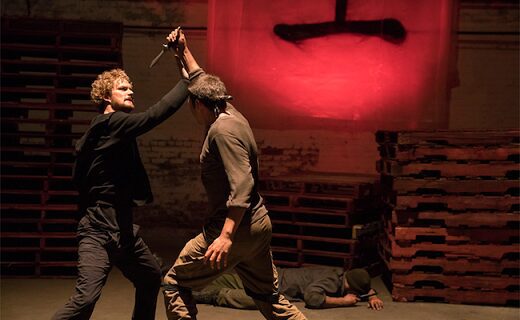 Even with the faith of the company in the balance, Danny remains focused on The Hand. As he continues his investigation into their operation in New York City he is invited to a challenge. A challenge that will test all of his training. Danny decides to except ignoring the concerns of Collen and Claire who have their own issues to worry about. The condition of their patent continues to deteriorate and they are running out of time. In a last-ditch effort to help Collen and Claire end up making things worse than before. The ladies may have failed their mission but through it all they showed that they are a good team.

As Joy starts to question her actions in the name of Rand Industries, Ward shows that he doesn’t have everything under control. He shows a part of himself that now one knew existed. He showed signs that he may a danger to himself and others. Meanwhile Danny begins his challenge in order to save a life. Danny showed in multiple fights that he truly is the Iron Fist and a real danger to The Hand. His victory was not taken from him by the crafty Madame Gao. She surprises Danny in more ways than one.

This episode showed that many of the characters can hold their own when Danny is not around. Also, that he does not need to be in every scene for it to be compelling. Collen, Claire, Joy, and Ward all had tasks that they needed to handle independent as did Danny. The fight choreography reached a new level in Danny’s challenge. Showing that Daredevil isn’t the only great martial artist and that the best is yet to come. As the show continues some questions are answered but even more are presented. The episodes ending will leave all viewers wanting more and more than likely watching the next episode immediately.