“They’ll never make a movie about girls like us, and you know why? Because it would be so sad that they’d have to sprinkle Prozac on the popcorn or people would kill themselves.”

Isn’t It Romantic has never hidden the hook of this film. The idea of an overweight, “ugly” woman who hates romantic comedies getting caught in the uber-version of a romantic comedy has always been placed front and center in all of the film’s trailers and is explained to the audience within the first three minutes. The movie pretty much challenges the audience with its premise—saying in essence, “This is the direction we are going to go, are you in or out?” That takes some guts, because if people aren’t interested then they going to make that decision right at the opening credits. 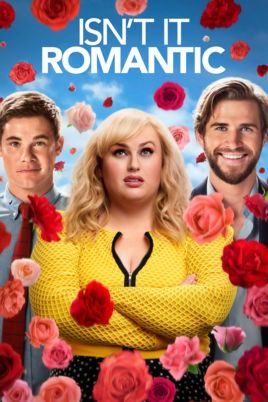 Wilson plays Natalie, a schlub architect, who is walked on by everyone at her job, who is unlucky in life and is blind to love. One traumatic hit to the head later and Natalie wakes up in a picture-perfect life where everything is literally wine and roses. From spontaneous dance numbers in the street to an apartment big enough to house five families, the dream version of NYC seems magical.

This film doesn’t take much to explain, it works overtime to bring up every tired troupe we have ever seen in a romantic comedy, points it out, highlights it, and then does its damnedest to try and subvert the expectations of the audience while still honoring the troupes it has pointed out? Feel confused? You should because this film is pulling in two very different directions. It asks the audience to be smart enough to spot and condemn all the earmarks of the genre, but to be dumb enough to take the commentary that the characters provide and the situations they find themselves in as charming and witty.

Wilson plays the down on her luck Natalie to perfection, but even she struggles to pull off the leading role in places. After a minute the idea that we are supposed to continue to scoff at Wilson for not being the traditional knockout beautiful lead female gets old. One minute the movie wants you to laugh at Wilson’s antics, and then question if she is lovable the next doesn’t work.

What does work in this film is when it steps away from its own self-important bullshit and lets the cast shine. The supporting actors in this film are where the movie really thrives. Hemsworth (The not Thor one) plays the smarmy billionaire Blake to perfection. He is the guy you love to hate because he is so damn perfect. Then there is Adam Devine who plays the loveable Josh. Devine tones down the craziness of his character from Workaholics and amps up the boyish innocence to surprisingly pull off a convincing love interest. But the real scene stealer of this film was Randy, the flamboyant and over-the-top gay best friend, played by Brandon Scott Jones. Jones owns every second he appears on the screen.

Have you seen this:
Rate the Best of Stargate with this New Podcast

As goofy as this movie and its premise can be at times, it somehow keeps the plot moving along just enough to stay entertaining. I think at the end of the day we are all suckers for a love story and who hasn’t daydreamed about the perfect life? This movie gives us a chance to see that maybe all that wonderfulness would be just too much and the idea of love in the real world should be enough for anyone.

Final Thought: A bumbling mess in spots, sugar sweet in others, this film is just good enough to stay on the right side of enjoyable.