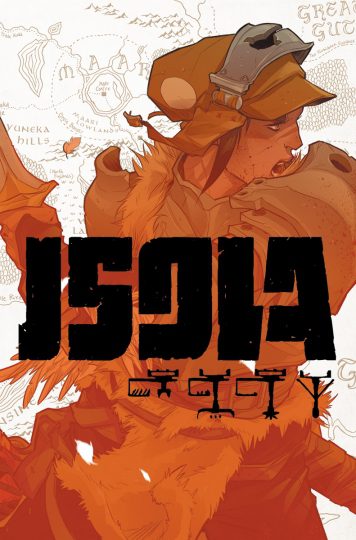 Isola #1 brings us a pair on a journey to lift a curse off of a queen who is in the form of a tiger-like creature right now. She is accompanied by our main character Rook who is clear to stop at nothing to make all things right. The lands they travel are filled with animals and monsters to watch out for. We’re not really given a lot of reasons why things are the way they are. The main trait we really have is that Rook cares very much for her queen and is trying to do everything to protect her. She does show she is quite skillful with her arrow and does not move from her stance when she needs to fight back.

In the beginning, we’re shown a sort of vision that Rook has and it seems more of what things may come but it’s not clear if it’s something that can be prevented. While that initial moment is used to show how much Rook cares for the queen, as it goes on we have very little knowledge of the queen but it seems she is a good person but right now is only able to express so in minimal ways. Hopefully, in the next issue, we get to dive more into our characters because even with the extra pages in this first issue, I still don’t feel like I have a clear grasp of everything but that may be due to an intentional slow build up.

Now the biggest takeaway from the debut issue though is definitely its art. The panel work along with the style is like seeing someone’s storyboard truly come alive. Certain colors used have this sensation of glowing and nothing really feels too muted. The terrain and plant life is nothing new and the few creatures we see are interesting and do leave you wanting to see more of them. Everything here gives off the sensation the beginning of a grand adventure. With an obvious strong fighter and the queen being the balance for Rook, it is apparent that they are going to need each other to get through whatever comes ahead of them. It is a slow start right now, but if things start opening up a bit more in the next issue, this will certainly become a series everyone will be talking about.