JAKE AND TOM CONQUER THE WORLD #113: TO BOLDY DRINK WHERE NO DORK HAS DRANK BEFORE

In this episode, Jake and Tom once again say “To hell with show prep”, and they wing it!  What started out as a ramble-cast talking about random geek news quickly shifted over to a subject that the guys have long neglected on the show: Star Trek.

Listen in as the guys go through a slew of news related to the franchise, discuss their relationships with the show, and talk about which technology from the final frontier they’re hoping to get hands on one day! 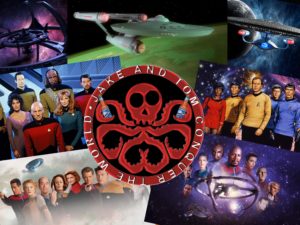 And as always, be sure to help Jake and Tom in their quest for global domination by rating them highly on iTunes, sharing their stuff on social media, and by telling your Android using friends to listen to them via the Amazing And FREE Couch Party App, available exclusively on the Google Play store!

Don’t forget to follow them on Twitter, join in on the conversation over on their Facebook page, “Jake and Tom Conquer the Group“, check out Tom’s side project, “Cobra Kai Kompanion“, and find more great shows like this through the guys’ partners in internet radio, Geeks Worldwide& The PodFix Network!