JAKE AND TOM CONQUER THE WORLD #132 – “LIVING WITH YOURSELF”: A DRUNKEN DORK REVIEW 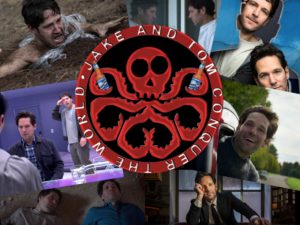 Jake and Tom decided to take the week off to celebrate the holidays with their friends and families, so unfortunately, their review of “Rise of Skywalker” will have to be held off until next Sunday.

But rather than not releasing an episode, they decided to put out one of their “reserve” shows, this one featuring their review of Netflix’s series “Living With Yourself”, starring Paul Rudd!

Listen in as the guys break down the plot of the show, as well as the subtext they only caught after the series’s end.

And, as always, be sure to help Jake and Tom in their quest for world domination by sharing their stuff on social media, following them on Twitter, joining in on the conversation over at their Facebook group, “Jake and Tom Conquer the Group”!  Also make a point to check out Tom’s work on “Someone’s Favorite Movie Podcast”, hosted by friend of the show Randy Perkins, as well as all of the other great shows found via their partners in internet radio, Geeks Worldwide!

READ THIS
Nerds Who Get Laid, Sometimes - Ep. 254: And We Haven't Even Got To The Best News Yeti