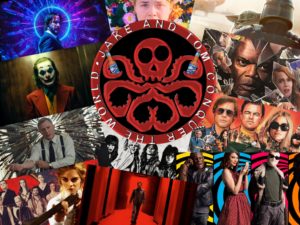 2019 was a helluva year in the world of television and cinema.  And while Jake and Tom weren’t always there to talk about it as it was happening, they’re ringing in 2020 by talking about the year that was!  So listen in as they and their fellow podcaster, Ryan of The Nerd Rage Podcast talk about what they thought was great about 2019, as well as what they thought what might might be politely called “not so great”.

And as always, be sure to help Jake and Tom in their quest for world domination by rating them highly on Apple Podcasts, sharing their stuff on social media, following them on Twitter and joining in on the conversation over at their Facebook page, “Jake and Tom Conquer the Group“!  And for more podcasts like theirs, be sure to listen in on “Someone’s Favorite Movie Podcast” (hosted by friend of the show, Randy Perkins), and by supporting all of the great shows brought to you by their partners in internet radio, Geeks Worldwide!