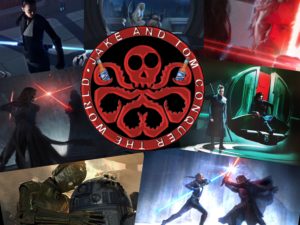 Now that the dust has settled on the release of “Star Wars: The Rise of Skywalker”, the internet has come through with the inevitable release of details of the troubled making of the film.

Listen in as Jake and Tom sit down for what their friend Roe calls a “ramble-cast” as they discuss the loose details of what Colin Trevarrow had originally planned for the film, the setbacks in the “Obi-Wan” series, and what’s rumored to be coming soon for the franchise far, far away.

And, as always, be sure to help Jake and Tom in their quest for global domination by rating them highly on Apple Podcasts, sharing their stuff on social media, following them on Twitter, and joining in on the conversation over at their Facebook Page, “Jake and Tom Conquer the Group“!

And for more shows like theirs, check out Tom’s guest spots over at “Someone’s Favorite Movie Podcast” (hosted by friend of the show Randy Perkins), and make a  point to support all of the great podcasts brought to you by their partners in internet radio, Geeks Worldwide!