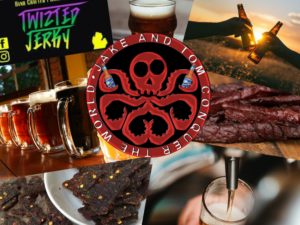 Jake and Tom have done a lotta different types of shows through the years.  But in all that time, they’ve never done one devoted almost entirely to two of their favorite subjects: Red Meat and Beer!

Tom was lucky enough to get hooked up with a sampler pack of handmade beef jerky, courtesy of the local artisans at Twizted Jerky, and so he and Jake decided to review it live and on air!  So listen in as your two favorite drunken dorks give you their thoughts on it while also sampling from Tom’s collection of cellar aged beer.  Along the way, the guys discuss the series finale of “Arrow”, talk about Jake’s new hobby of brewing his own mead, and Tom learns the hard way that Carolina Reapers aren’t for the faint of heart.

To learn more about the products available from Twizted Jerky, be sure to contact them by email at TwiztedJerky@gmail.com or simply call them up by dialing 248-237-3266.

And, as always, be sure to help Jake and Tom in their quest for global domination by rating them highly on Apple Podcasts, sharing their stuff on social media, following them on Twitter, and joining in on the conversation over on their Facebook page, “Jake and Tom Conquer the Group!”

And if you’re looking for more shows like this, check out Tom’s guest spots over on “Someone’s Favorite Movie Podcast” (hosted by friend of the show Randy Perkins), as well as all of the great shows brought to you via the guys’ partners in internet radio, Geeks Worldwide!