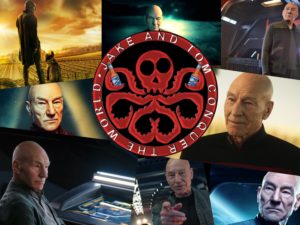 While they might not mention it as much as the other stuff they geek out to, deep down, Jake and Tom love Star Trek.  So it was with great anticipation that they sat down to watch the first three episodes of the latest entry in the franchise: Picard!

Listen in as the guys discuss whether or not it lived up to their expectations, how this show connects to other installments in the franchise, and how they think it adds to the overall “Trek Legacy”.  Along the way, the fellas also discuss their thoughts on CBS All Access as a whole, and Jake discovers an ice cream combination that is pure nightmare fuel!

And as always, be sure to help Jake and Tom in their quest for world domination by rating them highly on Apple Podcasts, following them on Twitter, by joining in on the conversation over on their Facebook page, “Jake and Tom Conquer the Group“, and by sharing the show with your friends!

And when you’re finished listening to this episode, check out Tom’s guest spots over on “Someone’s Favorite Movie Podcast” (hosted by friend of the show, Randy Perkins), as well as all of the other great shows brought to you via the guys partners in internet radio, Geeks Worldwide!