JAKE AND TOM CONQUER THE WORLD #140 – THE FUTURE IS NOW 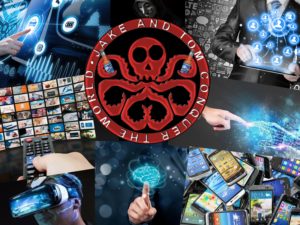 Feeling contemplative (and more than a little inebriated), Jake and Tom sit down with their old chums Matt & HAB (formerly of the dearly departed podcast “Couch Party”), look back and talk about all of the technological changes they’ve experienced in their lifetimes.

What follows is a fun and often times frustrating look back at the tech of their youths, in which the guys begin to wonder whether or not old school arcade games were nothing more than a scam designed to snatch as many quarters from little kids as possible, and how the cell phone was replaced by the Bluetooth as the douchebag weapon of choice.

Along the way, the guys ask themselves what may have been lost by acquiring this new tech.  Have we somehow managed to get dumber as a result of having all of the world’s information at our fingertips?  Should we be worried about our phones “spying” on us?  And what are we gonna have to deal with when “deep fakes” become more commonplace?

Somewhere in all of this, Jake and Tom get into an argument about one region of Michigan’s dialect versus another, the guys look back fondly on the skills of “bar kids”, and HAB regales us with the legend of Potato-Top Thompson.

Be sure to help Jake and Tom in their quest for global domination by rating them highly on Apple Podcasts!  Don’t forget to follow them on Twitter or to join in on the conversation over at their Facebook page, “Jake and Tom Conquer the Group“!

And when you’ve finished this episode, you can find more like it by checking out Tom’s guest spots over on “Someone’s Favorite Podcast” (hosted by friend of the show, Randy Perkins), as well as all of the other great shows brought to you via the guys’ partners in internet radio, Geeks Worldwide!