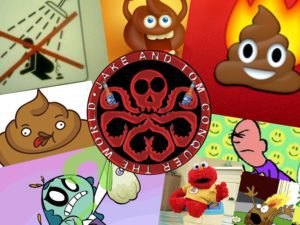 Listen folks…  Jake and Tom have never claimed to be “high class fellas”.  Yeah, they like to think they’ve had thoughtful discussions on a wide range of topics, but they’re not above laughing at dick n’ fart stories.  That’s where their old pal Roe comes in.  You see, a few years ago, Roe had to give up his annual “This Year In Fecal Matter” show.  And rather than abandon it completely, he simply passed it on to your favorite drunken dorks.

So settle in, get comfortable, and listen in as Jake, Tom, Roe and their friend Toph ask themselves such questions as:

What kind of madman thinks making gin from elephant dung was a good idea?

What were the logistics of Toronto’s infamous “Poop Bandit”?

Why does Jake have to heed the call of nature every time his wife drags him along for a shopping trip?

What kind of diet does one need to have to make their poo flammable?

If a man is trying to cross Antarctica by himself, why the hell wouldn’t he pack a change of underwear?

All of this, and so much more in this edition of “This Year In Fecal Matter”.

Be sure to check out Roe on his show “Project: Archivist” & Toph over on “Gravity Beard“.  And, as always, be sure to help Jake and Tom in their quest for world domination by rating them highly on Apple Podcasts, sharing their stuff with your friends, following them on Twitter, and by joining in on the conversation over on their Facebook page, “Jake and Tom Conquer the Group“!

And when you’ve finished this episode, be sure to listen in on Tom’s guest spots over on “Someone’s Favorite Movie Podcast” (hosted by friend of the show, Randy Perkins), as well as all of the other great shows brought to you via the guys’ partners in internet radio, Geeks Worldwide!