JAKE AND TOM CONQUER THE WORLD 92: CAN THE DCEU BE SAVED?

Joining Jake and Tom this is week is one half of The Epic Film Guys, Nick Haskins.  He came by to help the guys sort out the mess that is the DCEU.

Listen in as the guys ask themselves what they would do to fix it, how they’d change the “look and feel” of the franchise, which characters would be recast, who they’d want to see behind the camera, as well as which properties they’d like to see developed.

Along the way, Jake and Tom also ask Nick to discuss his upcoming project, which will benefit the Cancer Research Institute.  To find out how you can help, please visit his website, LiveStream For The Cure.

Have you seen this:
Change My Mind #96: Top Christmas Gifts

Don’t forget to follow the guys on Twitter and join in on the conversation at the Facebook page, “Jake and Tom Conquer the Group“.  And if you want to listen to more great shows like this, then Jake and Tom’s partners in internet radio Geeks WorldWide & The PodFix Network! 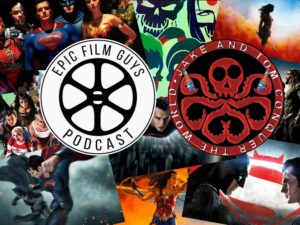