Once again, Jake and Tom were fortunate enough to cover the Motor City Comic Con, located in Novi, Michigan.  It was there that they bumped into fellow Geeks Worldwide alum Chris Scott, co-host of the podcast, “Watching the Multiverse“!

Every year, this comic con seems to be getting bigger, offering more in the ways of shopping, sightseeing & celebrity encounters, and this year was no exception!  Listen in as the guys bring you interviews & soundbites from people such as “Superman” villain, Jack O’Halloran, actress & fellow geek enthusiast Jordan Trovillion, “Cobra Kai” star, William Zabka, “Star Trek” veteran Garrett Wang, as well as excerpts from a panel celebrating the 40th Anniversary of “Superman: The Movie”!

Special thanks go out to our fellow podcasters, Comic Pros & Cons!

Don’t forget to follow them on Twitter, join in on the conversation on their Facebook Page, “Jake and Tom Conquer The Group“, and find more great shows like this one by checking out their partners in internet radio, Geeks Worldwide and The PodFix Network! 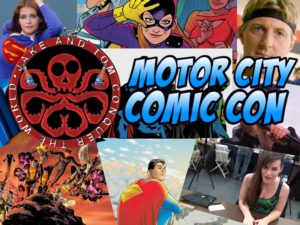