JAKE AND TOM CONQUER THE WORLD EPISODE 102: COBRA KAI – A “BEFORE AND AFTER” REVIEW

Have you ever experienced one of those things that you didn’t know how much you wanted it until you had it in your hands?

Jake and Tom had just such an experience with the show, “Cobra Kai”.  Being children of the 80’s & 90’s, they of course grew up with the saga of Daniel Larusso, and so they were naturally a little hesitant to see the story continue after almost 30 years.  As such, they brought in the friends, Peter (host of the excellent “Podstalgic“) to discuss what they wanted from s show showing Johnny Lawrence’s side of the story.

Flash forward almost two months, and the guys reconvened to discuss what has surprisingly turned out to be one of their favorite new shows of the year.  Listen in to find out what they thought of where the classic characters have wound up, what they think of the the new characters, and why Coors Banquet is such an awful beer.

And for more extensive coverage of Cobra Kai, head over & listen to TV Ate My Brain for Peter & Tom’s in depth analysis of each individual episode, interviews with members of the show’s cast, and much more!

Don’t forget to follow them on Twitter, join in on the conversation on the Facebook page, “Jake and Tom Conquer the Group“, and find more great shows like this through their partners in internet radio, Geeks Worldwide and The PodFix Network! 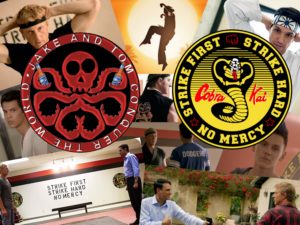