Jake and Tom are kinda winging it this week, and have decided to do a little bit of housecleaning with some of the subjects they’ve been meaning to talk about.

This includes a brief review of the Star Wars spinoff, “Solo”, an even briefer review of “Deadpool 2”, the most recent behind the scenes shakeups at the DCEU, what they’re hoping for out of “Wonder Woman: 1984”, “Green Lantern Corps” “Blackhawk”, the individual “Joker” movies, as well as the recent rumors about DC’s streaming service.  Plus, Jake gives his opinions on the end of “Legion”, the beginning of “Cloak and Dagger”, Andrew Lincoln pulling the escape hatch from the “Walking Dead”, and why no one should care about the upcoming “Spawn” movie!

As always, be sure to help Jake and Tom in their quest for world domination by rating them highly on iTunes, sharing their stuff on social media, and by telling your Android using friends to listen to them via the Amazing And FREE Couch Party App, available exclusively on in Google Play Store!

Don’t forget to follow them on Twitter, join the conversation on their Facebook page, “Jake and Tom Conquer the Group“, and find a whole bevy of shows similar to their through their partners in internet radio, Geeks Worldwide and The PodFix Network! 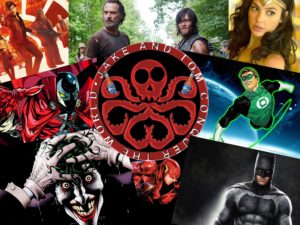