Jake and Tom decided to try something a little different this week.  Instead of their usual topics which center around the world of comics, movies, television and whatnot, they decided to engage in a series of what they like to call “campfire chats”.

We’ve all been there.  We get together with our friends, drinks are being passed around, and we let the conversation take us where it may

Some of this chart are pretty standard for this podcast, such as the dangers of Disney becoming too big of a company, or if the world really needs this many “Star Wars” movies.  Other subjects, well…  They’re kinda oddball, but they’re still a lotta fun.

“How oddball”, you ask?  Well, the guys go on to debate such topics as what kind of real-world effects teleportation would have, and whether or not film and television actors are becoming an obsolete profession.

Like we said, it’s kind of an oddball show, but the guys had a lotta fun recording it!  In fact, if you wanna suggest topics of your own, feel free to submit them to [email protected]

Don’t forget to follow the guys on Twitter, join in on the conversation on their Facebook page, “Jake and Tom Conquer the Group“, and find all kinds of other great shows by checking out their partners in internet radio, Geeks Worldwide & The PodFix Network 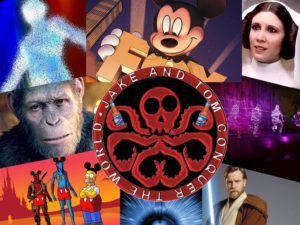