Once again, life got in the way of your favorite inebriated geek podcasters, and they were unable to record a new show this week.  But fear not!  Because lying in their vaults is another great episode of PodFix Present: Wizard Rewind!

Joining Tom for this look back on comic books’ past is fellow PodFixer, David from the amazing “Super Movie Bros” Podcast!  Join them as they sit down for a retrospective of Wizard Magazine, Issue 196.

To say that geek culture was about to enter a pivotal time in the winter 2008 was a pivotal time for geek culture is an understatement.  The world was bracing for the release of Marvel’s first “Iron Man” film, the internet was getting caught up in the viral marketing campaign for Christopher Nolan’s “The Dark Knight”, television was suffering through the third season of “Heroes”, and the comic stands were being rocked by the mega-events “Secret Invasion” and “Final Crisis”.

So hit the “Play” button and listen in as Tom and David look back on all of these events and more, as well as where each of them were in terms of being fans of the genre!

Don’t forget to follow them on Twitter, join in on the conversation over at their Facebook page, “Jake and Tom Conquer the Group“, and find more great shows by checking out their partners in internet radio Geeks Worldwide & The PodFix Network! 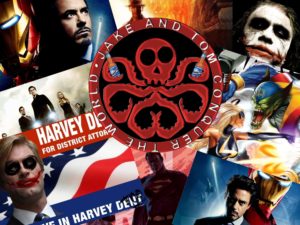