JAKE AND TOM CONQUER THE WORLD #58: A PODCAST ABOUT PODCASTS

Ever wonder what the glamorous life of a podcaster is like?  Then listen in as Tom sits down with Nick from the world famous show Epic Film Guys, as well as the returning fan-favorite guest, Randy from the might Miserable Retail Slave!

During their discussion, the guys talk about what got them into podcasting, their biggest influences, the pratfalls they experienced along the way, as well as the most rewarding perks of having a show.

As always, be sure to help Jake and Tom in their quest for world domination by rating them highly on iTunes, sharing their stuff on social media & by telling your Android using friends to listen to them on the Amazing And FREE Couch Party App, available exclusively on the Google Play Store!

Don’t forget to follow them on Twitter & Facebook, and if you’re stuck at a cubicle, be sure to check them out via their internet radio partners, Geeks Worldwide, The PodFix Network & Slings, Flings and Dingalings! 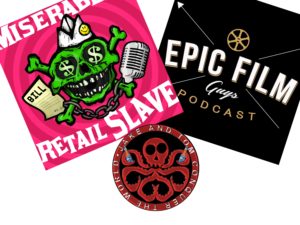 Affleck to Remain as Dark Knight as ...