JAKE AND TOM CONQUER THE WORLD EPISODE 64: “THE HATE EPISODE”

Coming back for a sequel to the last appearance together, fellow Couch Party Crew Members Randy & HAB are here to talk about more famous folks!  Only this time, instead of talking about the folks they’d wanna sit down with for a beer, they’re dishing on the celebrities they’d like to toss a drink at!  Listen in as they discuss the most horrible lady in news, a jock rock douchebag, a pretentiously bad actor and many other!

After you finish this show, be sure to listen to HAB on his shows “Couch Party” & “Doom and The Beast“!  Then check out Randy on the award winning podcast “Miserable Retail Slave” and drop him a line over at the “Miserable Hotline” at 810-328-3826!

And, of course, be sure to check help Jake and Tom in their quest for world domination by rating them highly on iTunes, sharing their stuff on social media & by telling your Android using friends to listen to them by using the Amazing And FREE Couch Party App, available exclusively on the Google Play Store!

Have you seen this:
Geek To Me Radio #206: Composer Raphael Reed on 'Crisis' with Gary Oldman-Angela DiMarco and David S. Hogan on 'The Parish'

Be sure to follow them on Twitter and Facebook, and if you’re stuck at a computer, check them out on their internet radio partners Geeks Worldwide, The PodFix Network & Sling, Flings and Dingalings! 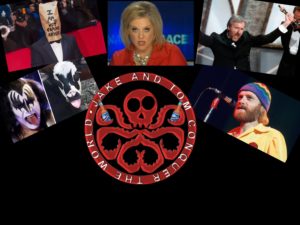