It’s the holidays, and Jake and Tom have decided to take a week off.  But rather than leaving their audience without an episode, they asked their pal, Peter, for a favor.

Y’see, a few years ago, Peter needed some similar help with his show, Podstalgic (formerly known as “Hydrate Level Four”), and Jake and Tom filled in for him for a week.  And this is that very episode.

For the uninitiated, Podstalgic is a great show in which Peter and his guests look back at movies from our collective past in order to see if they hold up to today’s standards. And for this episode, Jake and Tom revisited the two-hour pilot episode of “Lois and Clark” The New Adventures of Superman”.

Listen in as the guys discuss their memories of watching the show live, as well as what still works in the show & what might feel a little clunky after more than 20 years.

If you want to hear more of this type of podcast, you’re HIGHLY encouraged to listen to Peter on his podcasts Podstalgic and We Got Five.

And, as always, be sure to help Jake and Tom in their quest for world domination by rating them highly on iTunes, sharing their stuff on social media, and by telling your Android using friends to listen to them via the Amazing And FREE Couch Party App, available exclusively on the Google Play Store.

Don’t forget to follow them on Twitter and their new Facebook group.  And if you’re looking for more shows like this, check out Jake and Tom’s partners in internet radio Geeks Worldwide & The PodFix Network! 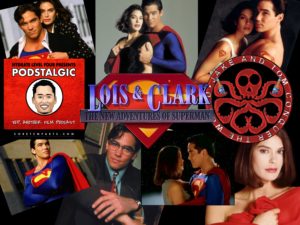