JAKE AND TOM CONQUER THE WORLD EPISODE 84: THE ENDLESS DEBATE

If there’s one thing comic book fans like more than superheroes, it’s getting into petty arguments with one another.  And on today’s show, Jake and Tom have decided to settle the biggest debates in all of comic fandom!

Inspired by a random comment from Epic Film Guy Nick and an old article from the blog, Comic Cube, Jake and Tom are trying to figure out the worthiness of Superman’s underwear, which Flash is the best, whether or not Batman should ever be happy, as well as who would beat who in a fight.

Wanna hear what their verdicts were?  Then click the “Play” button!

Don’t forget to follow them on Twitter, and join the conversation over at their Facebook page, “Jake and Tom Conquer the Group“!  And if you’re looking for more shows similar to Jake and Tom, then check out their partners in internet radio Geeks Worldwide, The PodFix Network & Slings, Flings and Dingalings! 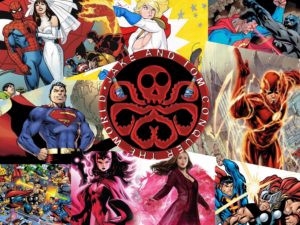