JAKE AND TOM CONQUER THE WORLD EPISODE 85: THE CONVALESCENCE EPISODE 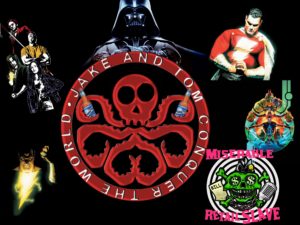 Jake is laid up this week, a victim of a knee that, in the words of his doctor, “Looks like sh!t”.

So, unfortunately, there will be no new episode of “Jake and Tom Conquer the World”.

But, because Jake and Tom don’t wanna leave their audience in the lurch, what you’ll be getting instead will be episode comprised of the best bits left on the “cutting room floor”.  In them, the guys and their guests go over previous topics such as well wishes for a fellow podcaster’supcoming wedding, Netflix’s “The Defenders”, the future of the streaming industry, predictions about Star Wars & Shazam, as well as the consequences of Jake’s experiments with the game of golf!

As always, be sure to help Jake and Tom in their quest for world domination by rating them highly on iTunes, sharing their stuff on social media, and by telling your Android using friends to listen to them on the Amazing And FREE Couch Party App, available exclusively on the Google Play Store!

Don’t forget to follow them on Twitter, or to join the conversation on Facebook over on their page, “Jake and Tom Conquer the Group“!  And if you’re looking for more shows like this, check out their partners in internet radio over at Geeks Worldwide & The PodFix Network!