Join Jake and Tom as they take another dive into the news bag to talk about all the latest developments in the world of geek culture!

Among the stories the guys cover, Joss Whedon exits the “Batgirl” movie, Kristen Wiig is in talks to co-star in the new “Wonder Woman” movie, DC makes announcements regarding their online television shows, Marvel releases a trailer for one of their upcoming small screen projects, and a nerd icon has a brush with death.

Then after the break, the guys return for one of their retro reviews, in which the tables are reversed!  For years now, Tom has subjected Jake to movies that fall outside of his wheelhouse.  But now it’s his turn to sit down and watch something he’d otherwise never give a chance, as they finish out the show by sharing their thoughts on the 2004 Disney film, “National Treasure“!

Be sure to help Jake and Tom in their quest for world domination by sharing their stuff on social media, rating them highly on iTunes, and by getting your Android using friends to listen to them via the Amazing And FREE Couch Party App, available at the Google Play Store!

Follow the guys on Twitter, join in on the conversation over at their Facebook page, “Jake and Tom Conquer the Group“, and find similar shows through their partners in internet radio Geeks Worldwide & The PodFix Network! 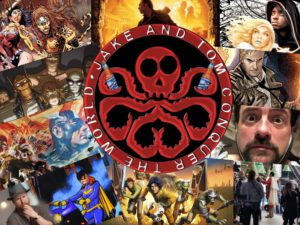 Multivarious talks “No Mercy” on Press Any ...