JAKE AND TOM CONQUER THE WORLD EPISODE 90: JESSICA JONES – START AT THE BEGINNING – A “BEFORE AND AFTER” REVIEW

Over the years, Jake and Tom have grown to be pretty big fans of the collaborations between Netflix & Marvel.  So when the time came to review the first new episode of Jessica Jones in three years, the guys decided to break out their microphones & give it their “Before and After Review” treatment!

Along the way, they made sure to spend a little time on some of the bigger geek news, including Jake’s anticipation for the launch of a new RPG system, casting announcements on the small screen adaptation of Garth Ennis’s “The Boys”, DCEU contract negotiations, Jake’s growing hatred of leaked photos, and Tom’s continued frustration over the way a certain comic book “artist” keeps failing upward.

As always, be sure to help Jake and Tom in the quest for world domination by giving them a five star review on iTunes, sharing their stuff on social media, and by telling your Android using friends to listen to them via the Amazing And FREE Couch Party App, available exclusively on the Google Play Store!

Don’t forget to follow the guys on Twitter, join in on the conversation over at their Facebook page “Jake and Tom Conquer the Group“, and find more great shows by checking out their partners in internet radio Geeks Worldwide & The PodFix Network! 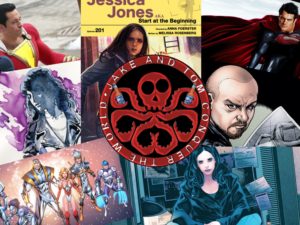