JAKE AND TOM CONQUER THE WORLD #92: A MURDEROUS MARCH MADNESS

In what has now become a yearly tradition, Jake and Tom welcome back their good friend Scott Edwards to take place in their annual “March Madness” competition!

This year, the guys have decided to pit some of cinema’s most lethal characters against one another in order to find out who the deadliest villain really is! Listen in as they debate who’d be victorious between Jason Vorhees, Michael Myers, the (now) fearsome Were-Predator-Wolf, a horde of zombies and many more!

As always, be sure to help Jake and Tom in their quest for world domination by rating them highly on iTunes, sharing their stuff on social media, and by telling your Android using friends to listen to hem & a whole bunch of other great shows via the Amazing And FREE Couch Party App, available exclusively on the Google Play Store!

Don’t forget to follow them on Twitter, join in on the conversation over on their Facebook Page, “Jake and Tom Conquer the Group“, and check out all of the great podcasts from their partners in internet radio, Geeks Worldwide & The PodFix Network! 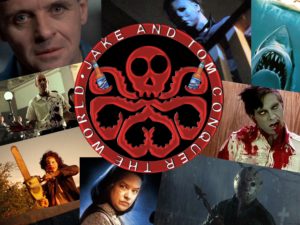