After a few months of solid and truly awesome Powered Geek Boxes January’s Anime theme box maybe is most disappointing offering to date. Last month’s Star Wars Box was truly something special so to take such a deep dive with the next box is a little heart breaking. I must preface this with the fact that I am admittedly not a huge fan of Anime so the items in this box don’t appeal to my fandom, but that doesn’t take away the fact that I still feel its contents are lackluster compared to previous months. But if Anime and specifically Dragon Ball are your obsession then this box is most definitely for you. You’ll get the typical fair of a POP! and t-shirt but when I first opened the box I was immediately struck by how empty it felt.

There is nothing cooler than the act of going Super Saiyan, and this Goku Super Saiyan Funko POP is a striking undoubtedly a striking design. It’s bright colors, dull green eyes and electric hair style makes it hard to go unnoticed. If Dragon Ball was my thing I would certainly be excited and this is by far the best thing in January’s Powered Geek Box. But because I’m not a huge fan of the property instead this will go to someone who is, regardless it is a really good looking figure and only missing some extra flare in the form of flames or electricity, which could have been add on his hands or around his body.

The Pokemon Moncolle would probably get hardcore Pokemon fans excited but for me it barely moved the needle and left me more bewildered than ecstatic. Maybe if this had been a Pokemon I actually recognized its inclusion would have had more of an impact, but unfortunately I was given a creature I know nothing about and have never seen before and thus it was just anything I wanted or have a desire to keep. So like the Goku POP! this will be given to an actual fan who may have get more value out of it than I ever would.

If I were still in high and had a fortress of solitude to decorate you can bet I would have loved this One Punch Man posters. Unfortunately my poster days are long behind me and my walls are now adorned with high end art, family photos and the occasional comic book. Even though I have little use for posters, I can’t deny these are pretty bad ass and would have any Anime loving teen screeching with excitement. Again being unfamiliar with the Anime it self outside of catching a few episodes on Adult Swim from time to time, I have no personal connection to the One Punch Man making it hard to have any enthusiasm. 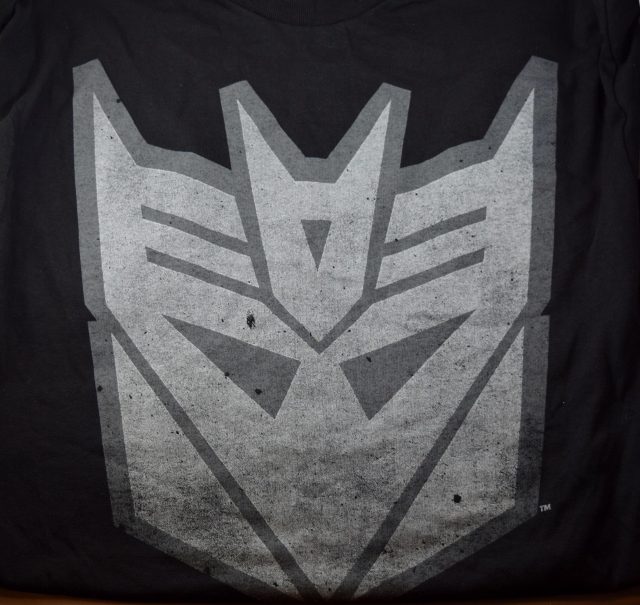 Every box from every company usually includes some type of apparel, I know because I get a lot of them and this maybe one of the worst shirts I have ever received. While I love Transformers, this Decpticons shirt is boring, uninspired, bulky and just another typical, cheap t-shirt. Now, it does appear you have a chance to receive another Transformers shirt and from what I’ve seen of that one it is much cooler and may have peaked my interest more, but alas I didn’t recieve this one and instead got this ill fitting, grey shirt that feels like it came from the bargain bin at Wal-Mart.

Lastly we have what I like to call the trinket items. This small gifts can make or break a box as you can always expect a POP and t-shirt but the smaller items can literally be anything. January’s Powered Geek Box‘s small items were just another disappoint in a not so stellar box. I thought trading cards were a thing of the past but apparently they are not and while a 8 year old might find these an intriguing inclusion, I just felt they were unnecessary filler and would eventually become trash. The Kiss Hello Kitty mints are adorable and again a fan of either Kiss or Hello Kitty may have gotten a little more pleasure out of them than I but considering neither Kiss nor Hello Kitty are something I adore, it may have well just been an Altoids box. 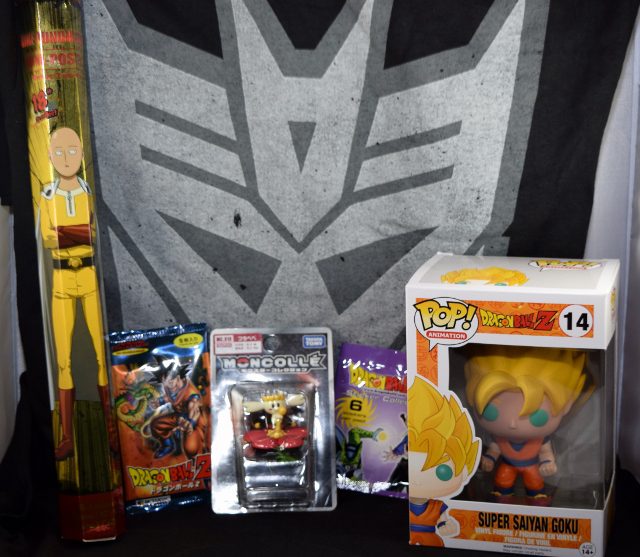 As we close the door on January’s Powered Geek Box review even though I wasn’t impressed with this box as I was with the others, I still haven’t lost hope in Powered Geek Box and understand they can’t all be winners. I also admit that most of my displeasure with this box is centered around the fact that I have little to no connection to Anime or Dragon Ball. So if your a die hard fan of Anime your opinion on this items will obviously differ, except for the t-shirt, its just awful.