Jem and the Holograms: Dimensions #2 REVIEW 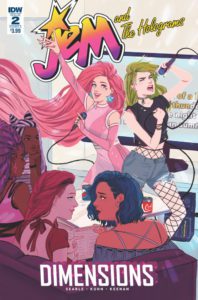 and the Holograms: Dimensions #2
IDW Publishing

As a long time fan of Jem and the Holograms, I always love when I see their names come across my virtual desk. While I keep waiting to see Kelly Thompson’s attached to it, nothing in this run disappoints me. If you did not read issue one, then the new style may confuse you. The quick version is, this is an anthology series, each comic is made of two separate stories. Where they fit into the Jem timeline is given on the opening page. Being the resident Jem expert (Jem-spert?) at Geeks WorldWide, I really dig the connections they are making to past runs. I am curious if people who are new to the series are missing out. Feel free to comment here or Tweet to me and let me know. 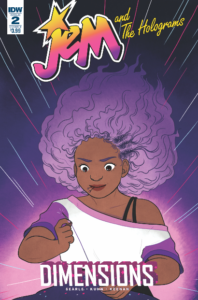 ight be building the fight up a bit, but it is intense. When you are planning to have a night of fun and singing, maybe it is not the best idea to invite two of the biggest bands. Well, at least invite bands that do not have such an epic rivalry between each other. It is the Holograms versus the Misfits on a battle to the death… again, I may be adding my own personal bias in here. It is a fight to be seen either way. The winner may surprise you!

The second story (Star Girl) has fan favorite, Shana take center stage. This is a story that even though has been told and retold, finds new life here. Shana has a design final coming up and lacks the confidence she needs to pass. She tries to use Synergy to cheat, but ends up learning a lesson instead. Out of the two, the art style in Star Girl is my favorite. While Face Off was great and almost anime like (which I really dig) the simplified look in Star Child really pops. The way the styles work in one book is truly outrageous… I mean amazing!