As Season 2 has finished its re-establishment of the status quo, and the introduction of its current story arcs, the intensity for both the viewers and the characters revs up to full force. With threats of all walks of life peering around every corner, Jessica Jones often feeling like she is the greatest threat of them all, there is absolutely no shortage of intrigue developing throughout this season. My personal favorite of the Netflix Marvel Series (which is a huge feat to obtain) it is the insanely talented and perfectly cast ensemble that pushes our booze-infused super powered P.I. to the forefront. The chemistry, which blew me away in Season 1, only continues to exalt to new levels throughout Season 2. Interactions between not only our principal actress and the supporting cast but within the supporting level cast themselves are one of the most organic feelings I have ever seen, show or film, comic book based or not, in as long as I can remember. One of the most commendable aspects of this season specifically, is its ability to develop rich multi-faceted storylines, filled with both background revealing, character brightening and damning actions, and forward propelling storylines for every cast member that has more than five minutes of total screen time. 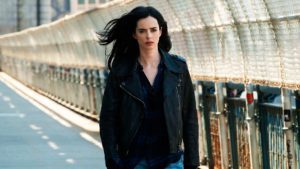 The ability to interweave such a rich tapestry of stories without any of them becoming too muddled and lost in the fray, while maintaining the focus on the overall plot of the series and finding that perfect balance on that fine line of ‘how much comic book is too much comic book is a true testament to the cast, showrunner, writers, and the entire crew as a whole. This Season of Jessica Jones is shaping up to have as many unpredictable layers as our expertly portrayed lead character, Jessica Jones, herself. Krysten Ritter, breathes such a life into Jessica Jones that it is impossible to not love and root for this otherworldly jaded anti-hero as she reluctantly battles her slew of demons while constantly battling letting those closest to her in and giving into her fear lead instinct while pushing them even further away from the arms-length she holds them at.

Ritter bestows an expertly delivered wit, cynicism, rage, fear, and a beautifully complex dichotomy of hard and soft that flushes out every minute micro-chasm of characterization that was ever pinned in the multitude of issues Jessica Jones appeared in the comic world. As I watched Season 1, I truly felt that Jones’ character was the best fit from the Netflix world to join the MCU world due to the general nature of her character, as well as how well she continues to be portrayed. While I still feel that 100%, I know wholeheartedly am behind endorsing that the principal ensemble of Jessica Jones in its entirety has the character development and the chops necessary to compete for screen time and admiration on the big screen. 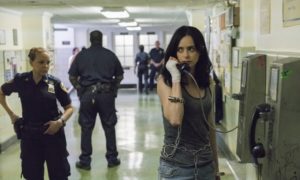 With the stories for all of our characters building more and more layers, the amazing work, especially by Ritter, Taylor, Darville, Ramirez, and Moss, my favorite parts being how Trish Walker and Malcolm Ducasse grow and evolve along their own storylines, interacting together, and standing their ground to Jones. Refusing to be left on the sidelines I am perpetually drawn closer and closer into the scenes, immersing myself in the world of Jessica Jones. If I had to have a complaint going into this episode, it is purely, knowing the nature of the Marvel Netflix lineup, that episode 4 is far closer to the end of the season than a show airing on a traditional network would be. The formula itself is absolutely perfect, but the writing and performance is so good, I never want it to end. As much excitement and suspense develops throughout the series into episode four, I cannot wait to see what happens by the time we arrive at the next chapter of our journey!