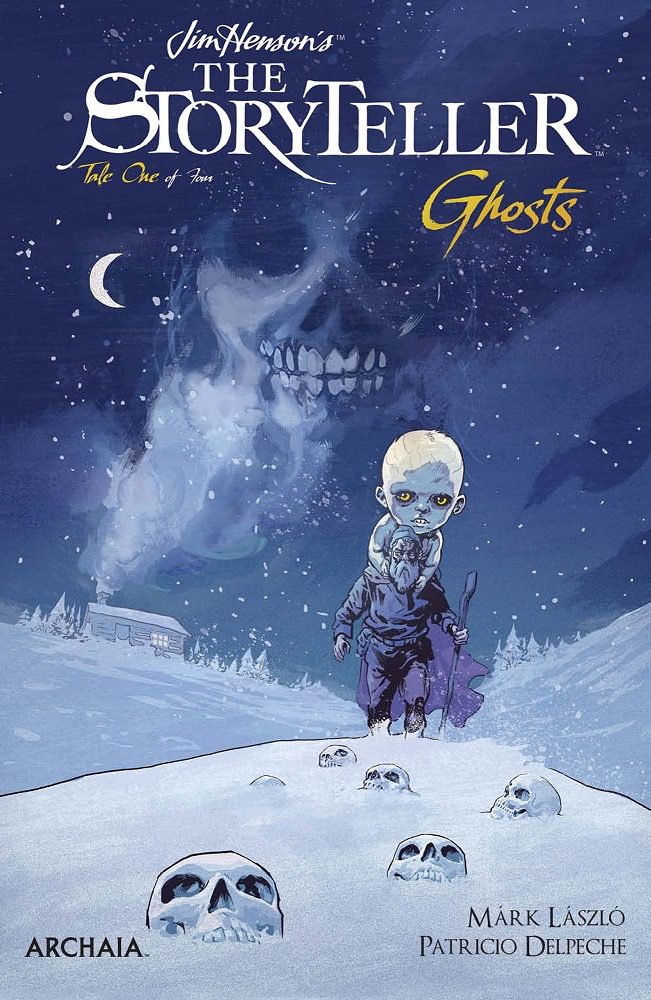 My favorite anthology series typically have one thing in common, a charismatic and creative character who opens and ends each story or episode. The added benefit of the Henson name has made the StoryTeller a top tier series for me. I was excited to read a new tale presented by this familiar franchise.

The beginning of this issue was classic Sunday evening television for me. The dialogue and banter between the Storyteller and Dog was nostalgic and gave the issue the opening it needed. It wasnt long into the issue that I began to sense things were slightly different than the show from my youth.

Possibly overlooked in the title is the word “Ghosts”. It became apparent while enjoying this first tale the word was not placed there by accident. Unlike the stories I remembered, today the Storyteller was sharing a haunting tale of sadness, burden, longing and regret. He does this while introducing us to a new folktale, a possibly unheard of ghost – The Myling.

What begins as happiness of twins being born soon turns to sadness. Given the times, a child let alone two are just two more mouths to feed. Being unwed and unwanted by her lovers family, the young woman and her children are cast out. In a moment of selfishness the mother abandons both in order to save herself.  As fate would have one child is found alive and spared a horrible demise.  The other child, having died in such a horrible fashion, is forced to wander the earth wailing as the Myling.

Through the combination of word and image, Mark Laszlo presents a story as chilling and cold as its setting. The temperature of the colors chosen helped provide a nordic feel to the story harkening back to the dark ages, a time of fear of the unknown and what lurked in the shadows.  Everything combines beautifully to provide the right amount of atmosphere for this ghost story.  The images of the Myling, clinging to its host while growing bigger as it grows weaker, is one of the most captivating images in the issue.  As for the story, the Storyteller doesn’t disappoint.  With each line of dialogue I can almost hear his baritone voice as he relates this sad tale.  Dog provides a few breaks in what is a lovely although morbid tale.  I was unfamiliar with the tale of the Myling before reading this issue.  This is a well crafted story and mythos that could stand with most traditional terror tales.  Jim Henson’s The Storyteller – The Myling is a both a wonderful return to a classic show while also providing it with a increase in intensity.