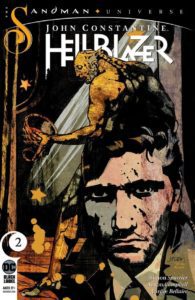 So…William Blake. Can’t say I saw that one coming.

And it turns out he’s a bit of a racist. Whether or not that’s historically accurate — probably is, given the time Blake lived in — it’s a bold move by Simon Spurrier. Not because there’s a William Blake following that’d be outraged (at least, not that I know of), things like this within any story can infuriate people these days.

This serves as another example of the tone for Spurrier and Aaron Campbell’s interpretation of John Constantine. He doesn’t care. Neither do the people in his world.

Another example is where John Constantine: Hellblazer #2 opens. I’m not one for having gross imagery just for the sake of it, but that’s not the case at all with Campbell and Jordie Bellaire’s artwork. Constantine lives in a %&^*#-up world. There is nothing redeeming about what it is he or his acquaintances do. The art should represent that at all times.

One small sample of how messed up Constantine’s world is — even outside of his work — is that bizarre bathroom encounter he had with the cop.

What kind of cop holds a knife to a man’s exposed nether regions in a public place? Or maybe that’s normal in Britain? I don’t know. It seems wild to me.

Not to mention he complimented Constantine after their encounter. Was that supposed to make him feel better?