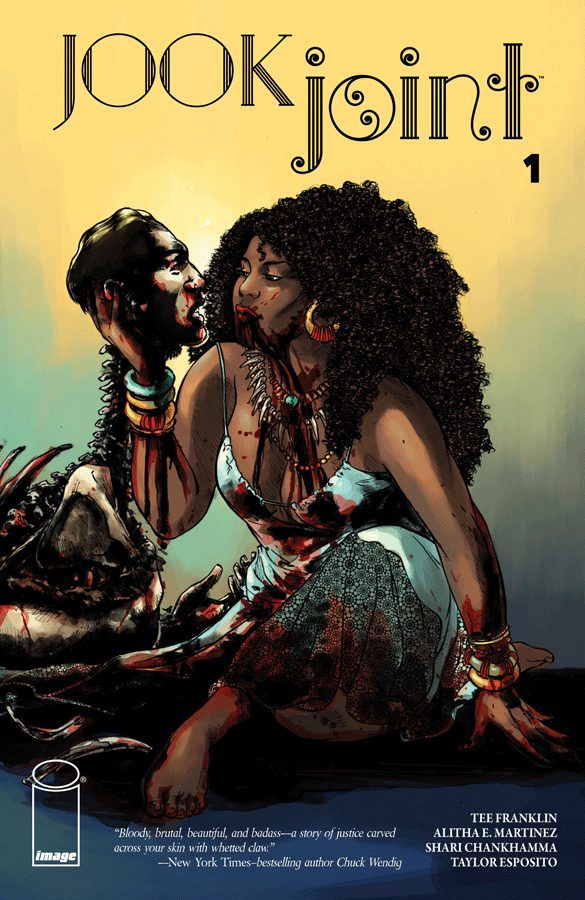 Jook Joint is horror mini-series that follows a Mahalia as she runs a sex-positive club, The Jook Joint, in 1950s New Orleans. The club has one rule, keep your hands to yourself. If you don’t follow it, there are consequences, to say the least. With the helped of voodoo magic and a group of women who have found solace in Jook Joint, Mahalia enacts revenge for those in most desperate need. Overall, the book is a violent revenge fantasy for victims of sexual assault. The book plays like a gore infested horror movie showing extremely graphic scenes of violence and cannibalism as well as featuring nudity.

Unlike many comics, the nudity of the women in this comic does not show vulnerability, but instead power. Martinez’s art is beautiful and I appreciated seeing so many different body types. Additionally, Chankhamma’s coloring showed many different skin variations which is very important, particularly when illustrating people of color. My favorite part of the comic is the end of the issue seeing Mahalia consoling and sheltering a woman who has been a victim of domestic abuse. It is important to note this is a story about abused women from the viewpoint of a woman who was able to escape abuse. This book deals with dark themes but at the end of the day, I commend Franklin, previously wrote Bingo Love, and the rest of the creative team for tackling this topic.

For some victims, I imagine this book could be therapeutic but for me, it just came off as too much. I usually enjoy horror comics and did look forward to this book. However, I did not enjoy it as much as I had hoped. If you enjoy torture porn type horror movies this may be a comic for you. Also, if you have any triggers regarding sexual assault, sexual violence or rape I would tread lightly before reading this book. The publisher did say they would include trigger warnings and I respect them for that. Jook Joint is currently out now in comic shops.