Judas Priest have collaborated with Parliament Tattoo Studio in London to bring together an exhibition of hand painted leather jackets inspired by the band’s albums and song titles. The artwork is by some of the world’s greatest tattoo artists. 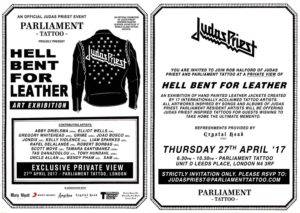 Rob Halford is taking time out from recording in the studio with the band to open the exclusive showcase on Thursday April 27th. After the public exhibition the jackets will be moving to Brighton to be shown at the Brighton Tattoo Convention on 13th and 14th of May. Jackets will be auctioned off at a later date to be announced.