Jump Force is a new 3D arena fighting game developed by Spike Chunsoft and published by Bandai Namco Entertainment. The trailers have been very impressive with their visual direction and roster as they continue to reveal more of who will all be  joining the fight.  At it’s core, it is a 3v3 fighting game like Dragonball Fighter Z and Ultimate Marvel vs Capcom 3.  But the 3D arena aspect will feel familiar to anyone that has played the Naruto Ultimate Ninja Storm series or the newly released My Hero One’s Justice.  I want to go ahead and say that my initial impressions of the game are very good.  After a few matches and learning how the systems worked which doesn’t take long.

You’ll quickly begin clashing with the opponent and it all looks very flashy with very fast movements.  Your team shares the health bar and you’r able to tag out if a team member is available because they will need to cool down if you called one out for an assist.  Ability’s are easy to access as you hold down the left trigger, a list appears with moves mapped to one of the four face buttons but do require a meter to use which can be built by either charging it while standing or landing hits or taking hits.  A super is used once your Awakening Gauge is at least 50% full. 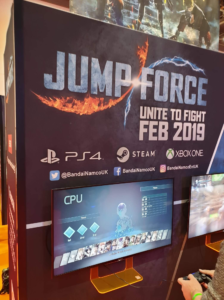 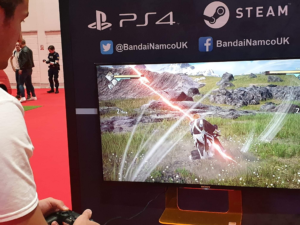 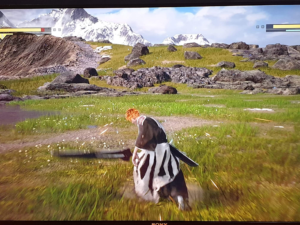 The best thing I can say about the game is that it is very easy to learn and even though things can look crazy on the screen with all the punches being traded and explosions that go off from big attacks.  Everything is very manageable and most importantly, it’s just incredibly fun to play.  Even if you don’t know these characters from their source material, I still highly recommend giving the game a go.  Jump Force is set to release on February 15, 2019 for PS4, Xbox One, and PC.