The Just Dance series just released its 9th installment of the series. This game is out for the Nintendo Switch, Wii U, PS4, PS3 and Xbox One. I have to say, If the Xbox Kinect is still useful for anything, it’s the Just Dance series. Sure, the game includes an app that can track your movement, but I’ve found that when it comes to dancing games, believe it or not, the Kinect is where they shine. I will note I have yet to try the Just Dance series with Nintendo’s Joy-Cons.

Just Dance Unlimited, which is a paid subscription service that was announced back with JD 2016, has made it’s return. This feature allows players to pay songs from previous games as well as some exclusions. You can subscribe to Just Dance Unlimited for $29.99 a year.

The game include a handful of hits throughout the year but also includes some more obscure titles as well, providing a decent variety of tracks to dance to.

There are 50 songs featured in the game.

What’s also fun about this game is it features a new Kids Mode. Kids Mode is “developed with the help of kids’ experts to encourage healthy movement” Some of these songs include Disney Moana’s “How Far I’ll Go” and Eiffel 65’s “Blue (Da Ba Dee)”. As a parent myself, this game is great for the little ones to enjoy as well. The Kid Mode is great, and I’m actually surprised this feature has been introduced so late into the game. Ubisoft has certainly provided a game that is  fun for all ages. In Kid Mode, the stress of winning and losing has been removed and kids can just let loose on the dance floor. Also, don’t worry parents, the dance moves in this mode are also less suggestive than when playing in regular mode.

The game also includes a Double Rumble mode, which is a (Nintendo Switch) exclusive which features 5 exclusive Double Rumble choreographies puts the control in both of your hands for the first time in a Just Dance game – hold a Joy-Con in each hand, and feel the vibrations as you experience what it’s like to play in a Mariachi band, or take charge of a 5 star kitchen.

Despite these added features, Just Dance 2018 feels more like a continuation of JD2017. Unless you are a fan of dancing or party games such as this one, I don’t see newcomers missing too much from the series if they don’t pick this one up. 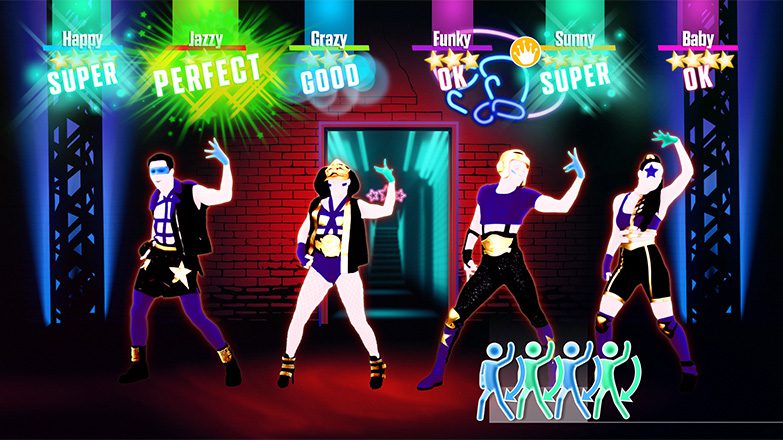 Though the tracklist does provide a decent variety of genres, I can’t help but wonder if this songs will get old after about a month or two of playing. For a game such as this one, I feel like we should be granted closer to 100 songs at this point. This is taking the subscription option out of the equation of course though.

Although, I understand the Just Dance games may not be for everyone, I will say it is a solid game to play with your kids or even when you’re feeling competitive with guests over. It’s a great party game for all ages with a pretty awesome soundtrack. If all else, it’s a great way to work out! If you are a current fan of the series, dancing, or perhaps skipped the 2017 version, this is a game you’ll want to pick up.