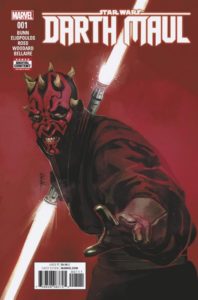 It is always great to see a character like Darth Maul return to the Star Wars universe. I’ve always felt that he was built up to be something huge and scary, only to die in his first duel with the Jedi. He should have been the Darth Vader of the prequels. His design is so scary and could have been timeless. Fortunately with Clone Wars, Star Wars: Rebels, Star Wars Novels and now his own comic, we get to see more of his badassdom we should have seen in the movies.

The story starts out with Maul hunting Rathtars. If you remember from The Force Awakens, Han Solo was transporting a few of these squid like killing machines. After Maul is able to kill a Rathtar, we get a scene reminiscent off the “Clever Girl” scene from Jurassic Park when Muldoon is hunting the raptors. Rathtars apparently hunt in packs, which is pretty terrifying.  Unlike Muldoon, Maul is able to make quick work of this pack of needle teethed squid monsters.

We then travel to Coruscant, where Maul is stalking a few Jedi. The Jedi sense something, and are distraught when they aren’t able to find this disturbance in the force. Palpatine knows what Maul has been up to, and is not happy with his apprentice. Maul has been becoming more and more impatient over the time it is taking Palpatine to get all of plans together. But Palpatine has a mission for Maul to at least appease his bloodlust, for now. He sends him to Kellux where the Trade Federation needs assistance with some pirates.

While dispersing the space pirates, one gives him some information on a Jedi Padawan that is to be auctioned off to the highest bidder. Maul kills everyone on the space station to keep this secret to himself. He gets in his ship and heads off to the find this Jedi in training. 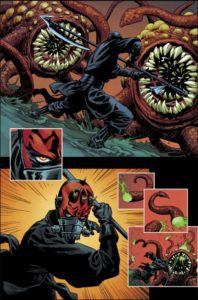 I really enjoy Luke Ross’ art in this issue. Maul always seems vicious. Everything feels very much like it is in the Star Wars universe. The story seems to take on the characteristic of the Star Wars movies, wherein they like to take place in 3 different settings. We get the almost swampish planet of Twon Ketee at the beginning, Coruscant at the middle, then the space station at Kellux at the end. Overall it all seemed to work out pretty good. The story by Cullen Bunn is setting Maul up to be the vicious Sith we know him to be.

We get a second little droid story after this by Chris Eliopoulos and Jordie Bellaire. Set during the events of Phantom Menace when Darth Maul sends out the surveillance droids. A delightful, completely self contained, little droid story where two droids become friends. The art and writing are perfect for this, and it adds a little fun to a comic that could just be violent.

I can’t wait to see where this story goes. I always enjoy a little bit more Darth Maul. It does have the makings to be a re-hashing of the story line to Star Wars: The Force Unleashed, but I hope that doesn’t happen.

If you are a Star Wars fan, and a Darth Maul fan, I’d recommend giving this one a shot.