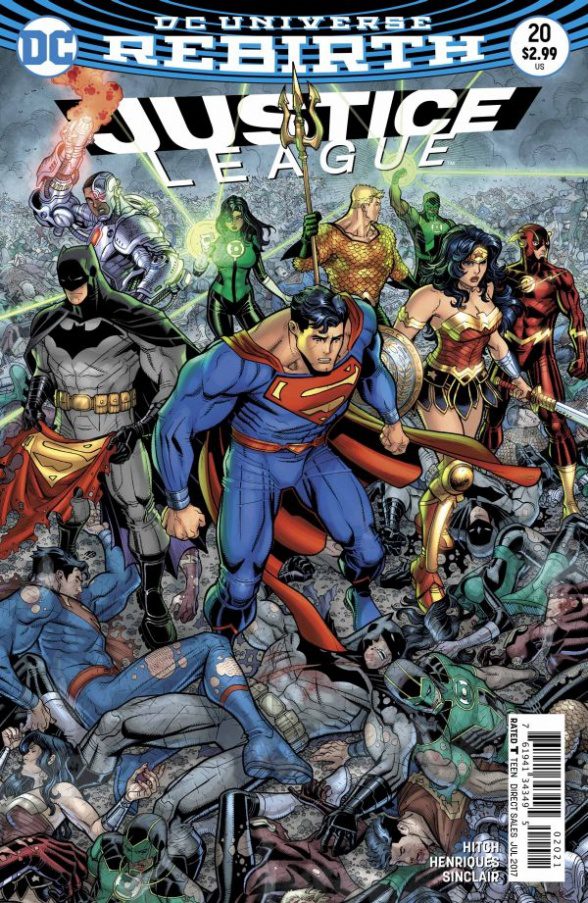 It seems like the Justice League cannot escape time, or at least stories about time. From the last arc to this one, time seems to be a prevailing theme in the storytelling for this comic. The issue begins with tragedy as Barry is left crouched over the dying body of one of his teammates in a devastated, crumbling city. As he goes after the man responsible, their interaction causes the pair to travel back to the moment before the tragedy in the city. Barry and Jessica are sitting in a café having breakfast when he realizes what is about to happen. As the mysterious villain attacks again, Barry realizes that everything feels familiar, but his realization is too late to help Jessica, who is skewerd by the bad guy’s weapon, leaving her dying in the street. As Barry attacks again, he is transported back further to the moment he was going to meet Jessica for breakfast.

The villain attacks sooner this time and Barry goes into action to prevent having to watch Jessica die for the third time. Each time he attacks, he blames the heroes for the death of his family. Barry decides to try and travel back to before the attacks began and we see a man named Jason being greeted by his wife and children before presenting his invention to a crowd. He is the mystery villain that has plaguing Barry throughout the issue and he explains what his device does before the crowd of onlookers. As the League appears to stop the threat of the man’s device, their presence, specifically Barry’s connection to the Speed Force inadvertently causes the device to activate. In the aftermath that follows, Barry realizes what went wrong, but has he learned it too late?

I’ve been reading comics for a long time. I’ve been witness to many different stories involving time and time travel and, while interesting to read, nothing about this particular issue doesn’t seem original to any of those other stories. Hitch’s artwork is really well done and he is able to move the story well both with plot and visuals, but there is the hope for me that this arc does not last longer. The middle of the issue basically laid out how the overall arc should end and anything beyond that relatively simple resolution would be gilding the lily. If this is a two issue interlude before a more sustainable arc than that’s fine, but this story cannot effectively last past three issues without becoming a parody of every time travel trope that has been used in comics.