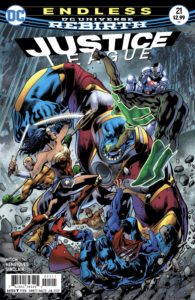 The tragedy that set the League’s newest villain on his path is laid out in the beginning of this issue and it is a sad story to be told. As Barry Allen wakes up in the midst of a battle, he realizes that he’s been blasted into the past again. He quickly tells Batman what has been happening to him. As the two of them leave the League to finish battling another giant monster, Batman decides to take control of the situation and orders Barry to stay away from the device. A move that Barry does not take too kindly to. Barry thinks that his connection to the speed force is what caused the device to go off in the first place and Batman goes undercover as one of the security guards.

As the Justice League mops up the monster of the week, Barry contacts Cyborg in order to have the hero access some encrypted information about the experiment. Meanwhile, Jake is confronting his boss about a secret tryst between his boss and his wife. As more information is uncovered as well as the sordid history between Jake’s boss Tony and the technology used to create the device itself, events are set in motion that might not be able to be stopped this time.

The last issue of this series felt like the beginning of another time travel story and I really wanted it to end quickly. Thankfully, it did and the conclusion was worth reading. Bryan Hitch did an excellent job wrapping up this story and creating a compelling series of side characters that made me care about their ultimate fate. The story moved really well and the art worked both in the dialogue scenes and in the action panels. The fact that this story is leading Batman to a larger mystery makes this issue worth reading.