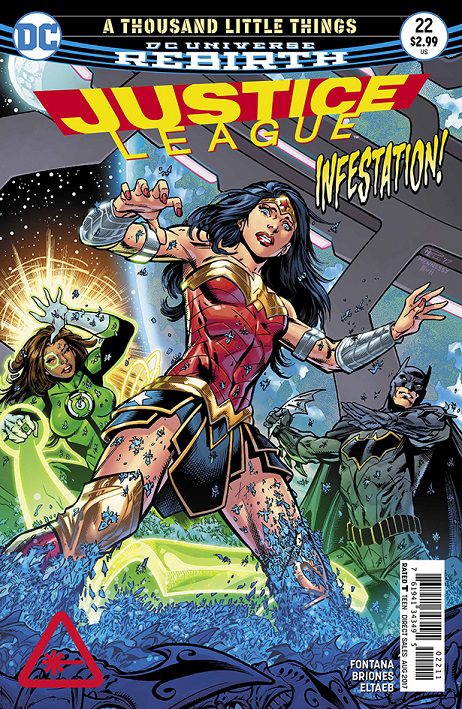 There’s something to be said for standalone stories and one-shots. They are designed to effectively tell a story that doesn’t require reference to previous arcs and doesn’t have the burden of setting up future arcs. This issue definitely meets those requirements, but not in the best sense. Green Lanterns Simon Baz and Jessica Cruz are tasked with destroying an asteroid heading towards Earth. A task that cannot be completed without a healthy dose of Jessica complaining about feeling less than worthy and Simon overcompensating. As the pair complete their mission and head back to the Watchtower, the rest of the team is there along with Lois, who is doing a story for the Daily Planet and Jon Kent.

There are some light moments between the team as they engage with each other, but the levity is short lived when Cyborg has to put the Watchtower on lock 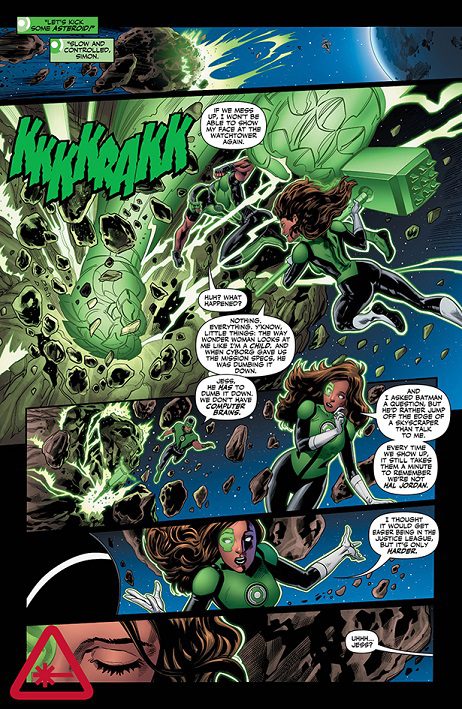 down because Simon and Jessica have brought aboard a swarm of microscopic alien life forms aboard which are all over them (How they got on them while the Lanterns were in space and enclosed in personal force fields to protect them from the vacuum of space is a question someone should have asked.). As Batman, Lois and Superman investigate and Cyborg spends time with Jon, Simon and Jessica are feeling sorry for themselves. It’s up to Diana to break them out of their funk the only way she can, by pounding some sense into them.

As a standalone story, this one is pretty simple. There aren’t a lot of layers to the narrative so it serves its purpose of being an issue of Justice League. The constant complaining from Simon and Jessica is becoming tiresome. At some point they need to become Green Lanterns and stop assuming everyone is comparing them to Hal Jordan or John Stewart. The artwork is effective and there are some nice moments in panels with Batman and Lois that are nice. Overall, there is a disposable quality to this issue. I never felt like I either learned anything about the characters or experienced anything memorable.