First and foremost, do not be fooled by the cover of this issue because I guarantee you Aquaman makes no appearance in it. The children of the Justice League have essentially moved out of the Watchtower and in with their respective parents. Hunter is at the Kent Farm having dinner with Clark and family. Eldora is having a heart to heart with Mera at Aquaman’s lighthouse. Cube is with Cyborg and Silas and the remaining kids are with Barry and Jessica in Central City. The moments are fine in and of themselves, but the lingering lack of motivational skepticism from any of them continues to bother me. 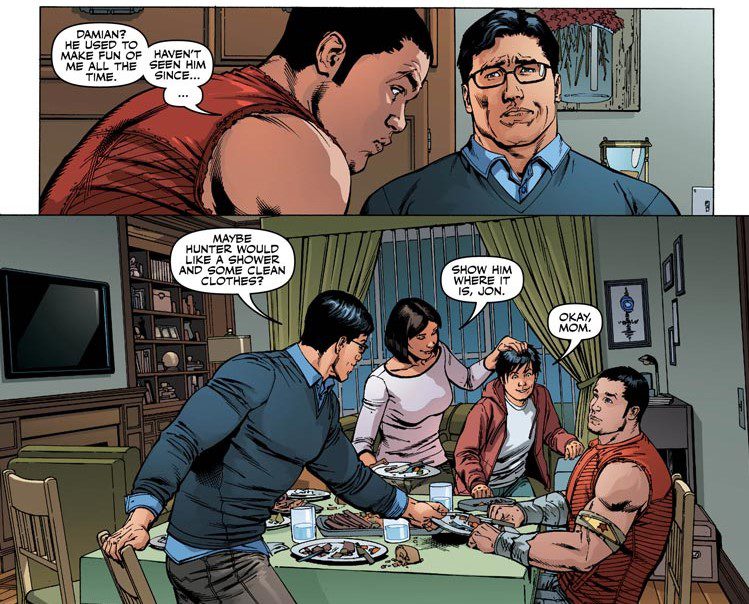 In Midway City, Simon and Steve Trevor are quarantining the infected townspeople as Simon begins to investigate the cause of the infection. Clark has a heart to heart with Hunter as Diana begins to go over records from previous battles and takes a good look at the part she has been playing in them. She comes to a realization that might change the entire League itself as Hunter makes a decision that could change everyone’s future.

This issue was really exposition heavy. I understand the need to flesh out the story a little, but there were way too many moments that seemed unnecessary to the overall plot. The animosity between Hunter and Diana would have been a better plot point to explore than trying to force a connection between these kids and the League. The art is well done and subtle. There’s no action in the issue to be found, so Pasarin gives some pretty detailed backgrounds in each panel that make them look really good.