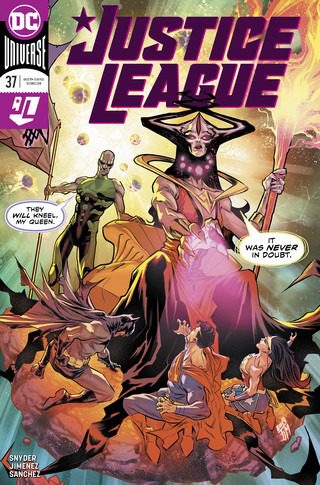 The final doom vs justice battle has begun and the heroes of the DC Universe face off against Lex Luthor and his army with a floating Legion of Doom headquarters squaring off against a mechanized Hall of Justice. With Batman leading the charge, the heroes give their all as a small band of League members hangs back to try to reform the Totality using the power of faith.

At the same time, Kendra and Shayne are on the run from the Anti-Monitor who wants Kendra’s wings to stop her from trying to help her friends. When John Stewart arrives to help, the blast frees the Monitor and World Forger as Perpetua flings an entire planet at the group. It will take a miracle to stop the rise of Doom and that miracle will rest in the faith of humanity itself.

Scott Snyder brings everything to a glorious apex in this issue. From massive battles to a desperate rescue mission, Snyder exceeds in ramping up both the tension and expectation in an issue that works brilliantly because the biggest hitters in the heroes ranks are sidelined to do the one thing they desperately needed to do to turn the tide, restore the hope of the people. The dialogue was excellent. The rapport between Jarro and Batman is so much fun that I continue to crave more of it. Nothing is predictable in this story and every surprise and twist is emotionally rewarding and perfectly fits the narrative. This is a great issue from start to finish and the conclusion is a glorious tease of a possibly epic conclusion.

Jorge Jimenez’s art is fantastic. Every panel is page is brilliantly drawn and detailed. The characters look amazing and the action is beautiful to behold. The opening battle is filled with characters and the fights are brutal and well done. I’ve gone back through this issue multiple times and continue to be awed by the visuals and how they complement the tone of the story.