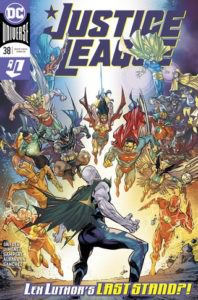 The Justice/Doom War reaches its apex and a hero will make the ultimate sacrifice to stop Lex Luthor.

As the Justice League fights both ultimate Apex Lex and his army, Shayne works with the other psychics in order to connect to everyone on the planet so they can see the battle taking place. Shayne knows he isn’t strong enough, but kind words from Kendra are enough to give him the courage to keep on fighting.

The rest of the Justice League continues to fight Lex to a standstill, but Luthor still believes he has the advantage. When Perpetua intervenes, it breaks Shayne’s connection but it also gives the young hero and his mother the moment they need to finally reach not only Lex Luthor, but the trapped Martian Manhunter trapped inside him.

Snyder takes the reader to the brink and back in this issue. From the awesome and inspiring dialogue to the action, this issue keeps moving the story in bigger and bolder directions. Every part of this issue works from the character journeys to the twists and the Trinity is shown at their best as they fight a seemingly losing battle with everything they have. The moment toward the end with Shayne, Kendra, and Lex is incredibly emotional. It’s handled brilliantly by Snyder and the issue ends on a note that is inspiring and makes me excited for what comes next.

Jimenez and Sampere bring their best to the art in this issue. The art is beautiful, sweeping and filled with brilliant details. The action is fantastic and the characters are rendered with palpable emotion. An awesome looking issue.