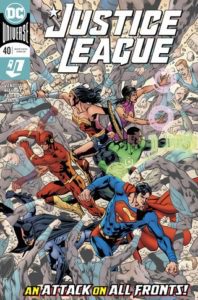 The Justice League will have to look for a new ally to help stop an army descending on the planet.

When a powerful being crashes on the planet, the Justice League assembles to investigate. When the being attacks, John Stewart recognizes the attacker as a former friend and Green Lantern. After taking the weakened man to the Hall of Justice, he explains to them that a threat is coming in the form of a group of genetically enhanced Daxamites led by the Eradicator.

As the team prepares for the impending showdown, Batman and Wonder Woman decide that the best way to stop a group of Kryptonians without Kryptonite is with another vulnerability the Man of Steel has; magic. Unfortunately, the Dark Knight’s search to get Madam Xanadu’s help gets complicated.

Robert Venditti is crafting a new story for the Justice League and a new arc that connects to Superman. Unfortunately, this story feels out of place. It feels like a story that would fit more in a Superman title based on the plot and apparent focus. The Batman part of the story is interesting and touching on the other issues affecting the team is fine, but there is a lack of a compelling story in the first part of this arc and even the end doesn’t have any punch to it.

Doug Mahnke has some awesome art in this issue. All of the characters look amazing and the details in the panels keep the reader engaged.